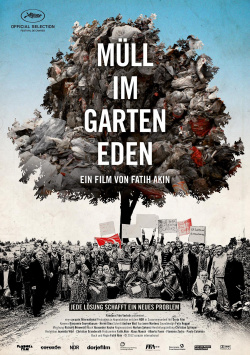 Garbage in the Garden of Eden

In search of filming subjects for his movie On the Other Side, director Fatih Akin came to &Ccedil;amburnu, his grandparents' home village in northeastern Turkey, in 2005. Akin was previously unfamiliar with this region, and he was immediately struck by its beauty. He was all the more shocked by the news that there were plans to build a landfill directly above the village. The filmmaker was immediately ready to demonstrate against the construction of the landfill with the means at his disposal: he decided to make a film about &Ccedil;amburnu and the residents' struggle against the landfill, hoping that this would suffice as a threatening gesture to gain enough attention and thus put pressure on those responsible. But the landfill was built, and the film became a long-term documentary, culminating sadly with the breaking of the wall of the sewage basin in December.

In the intervening years, there have been repeated protests, accidents, spills, investigations and illnesses among the local population. With the help of village chronicler Bünyamin Seyrekbasan, who over time became an excellent cameraman, Akin was able to capture events on location, always up-to-date. The result is a documentary that is impressive in many respects. On the one hand, Garbage in the Garden of Eden is a gripping portrait of a region whose habitat and livelihood are being destroyed by a government decision, and on the other hand, it is about the inhabitants' struggle against this crime against nature and mankind. The focus is on simple people who do not allow themselves to be intimidated by powerful institutions and do not give up their commitment to their homeland and environmental protection even after many setbacks.

Thus, the story of a small region becomes a global plea for civil courage. At the same time, the documentary also succeeds in something else: it shows the image of Turkish society as it is not conveyed in news broadcasts, documentaries, but also in many films. The fact that the film is not only informative, at times infuriating, but also gives rise to a certain hope, but is also extremely entertaining, makes this documentary so worth seeing. Fatih Akin succeeds first-class in presenting a serious topic, which can actually only generate extreme anger, in such a way that the viewer does not leave the cinema completely frustrated, but is also allowed to laugh in a relaxed way or to enjoy the quite normal absurdities of life.

So in the end, Garbage in the Garden of Eden is not only an important film, but also a beautiful one in its own special way, showing that Fatih Akin can tell not only fictional, but also true stories in an exciting, entertaining and extremely engaging way. Absolutely worth seeing, not only for friends of sophisticated documentaries!

Cinema trailer for the movie "Garbage in the Garden of Eden (Deutschland 2012)"
Loading the player ...