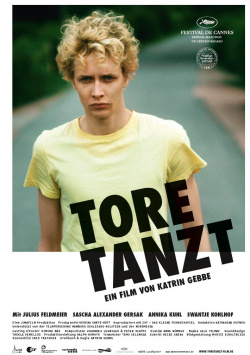 For Tore (Julis Feldmeier) there is really only one thing in life: his love for Jesus. He lives in a small punk commune called Jesus Freaks. He doesn't set much store by worldly possessions. He only wants to pass on his love for his neighbour, even if he is usually looked at askance or even ridiculed by his fellow men. When he helps the family man Benno (Sascha Alexander Ger&scaron;ak) in a car breakdown supposedly only with his faith in Jesus to continue, Tore does not yet suspect how much his life will change by this encounter. Disappointed by his flatmate's unwillingness to abstain from sexual activity, Benno offers him the chance to spend the summer with his girlfriend Astrid (Annika Kuhl) and their children Sanny (Swantje Kohlhof) and Dennis (Til Theinert) on his allotment plot. At first, everything looks as if Tore has found a new family here. But little by little Benno reveals sadistic tendencies, from which especially Tore has to suffer more and more. But his unconditional charity and unwavering optimism persuade him to stay with Benno, convinced that he can make him a better person through his love and faith.

With Tore dances, Katrin Gebbe has delivered a very uncomfortable, hard-hitting and provocative debut that hits the viewer right in the pit of the stomach, works its way from there into the mind and then settles there. Quickly, you really can't shake this story inspired by true events. That's not just because the film is given an unexpected timeliness by the case of modern slavery from London that's dominating the media right now. Nor is it just because of the terrifyingly intense acting revealed by Sascha Alexander Ger&scaron;ak in particular. Rather, it is the sense of oppressive helplessness with which one is confronted as a viewer that makes this drama so intense.

Tore's actions are not always comprehensible. One wonders more than once why the boy voluntarily stays with the family, although he experiences humiliation and violence here. But since Tore as a character is difficult to classify and grasp anyway, his unbroken optimism and his unshakable belief in the good in people doesn't seem forced or unbelievable. You take away from this person that he is truly convinced that he can change Benno and thus give Sanny, of all people, a better life. He really believes that his love for Jesus will help him in this difficult task. This may not be understandable to the viewer, but it is still believable. And that's what creates this disturbing atmosphere that makes this film so uncomfortable.

Gates Dances deserves a lot of respect. Respect for the courage to realize such a topic in such an uncompromising way. Respect for the acting performances of all involved. And also respect for a production that seems a bit over the top here and there, but overall just comes across as unsparing and completely unadorned. It's clear that not every viewer will be able to make friends with it. To be exposed to a movie that actually only makes you angry, that is in a certain way repulsive, depressing and disturbing, is a challenge that you have to face very consciously in order to realize the importance and the power of this drama. Those who succeed in doing so will be rewarded with a truly strong piece of young German cinema. But if you generally look for a retreat from everyday life in the cinema and like it when you can return to reality happy and in a good mood after a film, you will definitely cut your teeth on this work. Therefore: only for very courageous and open-minded lovers of German program cinema food absolutely worth seeing!