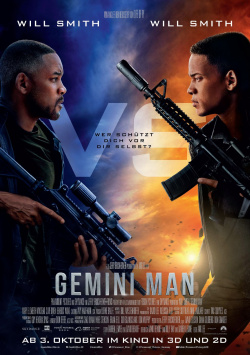 Henry Brogan (Will Smith) is the best hit man money can buy. But he feels that age is starting to show on him. Soon he will have to retire. His clients know that too, but they want to put him into eternal retirement in an unpleasant way. But how do you take out the best hitman? Clay Verris (Clive Owen) seems to have found the solution with his secret Gemini project. He sets a young agent on Henry who seems to know exactly how the killer thinks and who seems to be his equal in every way. As Henry, with the help of agent Danny Zakarweski (Mary Elizabeth Winstead), get to the bottom of the mystery surrounding the Gemini Project, they realize just how powerful their adversary really is.

It's no secret who Will Smith is up against in Gemini Man. After all, it's revealed not only in every trailer but also on the movie poster that he has to fight his younger self, or a clone. Technically, director Ang Lee and his team have pulled this off to near perfection. Like Peter Jackson's Hobbit trilogy, Gemini Man was shot in HFR 3D, which still takes a lot of getting used to, but makes for some stunning images of incredible sharpness, especially in the action sequences. So it's fair to say that from a technical point of view, the film is great and perhaps even something of a milestone (albeit a slightly scary one, it also highlights how convincingly images and video can now be manipulated).

One in particular that stands out is a motorcycle chase between Henry and his younger clone that is simply breathtaking. I'm almost inclined to say that this scene alone is worth buying a movie ticket for - whether you see it in HFR at 48 frames per second or in the conventional format at 24 frames per second. Because either way, it becomes clear that Ang Lee can direct not only drama but also action perfectly, and that even at 51, Will Smith is far from old news - and not in his computer-rejuvenated version.

The film also makes something else clear: technical perfection isn't everything! If the script is flawed, even mesmerizing effects and great visuals can only do so much. In the case of Gemini Man's story, the criticism relates less to the fact that there are many logical holes, and more to the fact that there are too many plodding, inconsequential scenes that repeatedly slow down the otherwise fast-paced action. As big and revolutionary as the film seems visually, it seems small and stale on a dramaturgical level.

This doesn't make Gemini Man a bad movie. It offers solid popcorn entertainment with some great moments and good actors. But that's just about it. For those who don't expect more and just want to borrow 2 hours from reality, this one can definitely be recommended. Worth seeing!