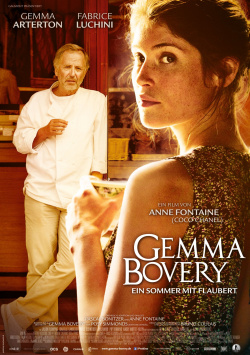 After his dream of a big career as a publisher in Paris failed, Martin (Fabrice Luchini) returned to his small home village in Normandy to take over his father's bakery. Although he lives in a true idyll, the literature lover is quickly bored and frustrated by the leisurely village routine. This only changes when an English couple moves into the house next door. For not only do the names of Gemma (Gemma Arterton) and Charles Bovery (Jason Flemyng) remind him of his favourite writer Gustave Flaubert. Gemma in particular seems straight out of Flaubert's Madame Bovery. The young woman exerts such a fascination on Martin that he becomes increasingly drawn into the parallels between her and Flaubert's novel character and wants to influence her life to the extent that it is worthy of the literary classic. He completely overlooks the fact that Gemma has completely different dreams and longings, which has fatal consequences - not only for the Boverys' marriage.

After already being allowed to embody the object of desire in Immer Drama um Tamara, an adaptation of a graphic novel by Posy Simmonds, the enchanting Gemma Arterton has also taken on this part in Anne Fontaine's film version of Simmonds` Gemma Bovery. And Arterton plays the role of the somewhat naive seductress perfectly. She is joined by a wonderful Fabrice Luchini as Martin, who projects his unrequited passion onto Gemma, pushing her into a role she can only live up to in his imagination. The film derives much of its appeal from the discrepancy between Flaubert's Madame Bovery and Gemma, who is so out of touch with her literary counterpart.

Of course, it helps if Flaubert's novel is familiar. But the script by Pascal Bonitzer and Anne Fontaine does a very good job of making the various allusions and parallels understandable to viewers who have not read the classic. Even though the lack of knowledge probably only begins to reveal the actual genius of the clever original, the humor infused with biting irony gives the turbulent story such a high entertainment value that the whole thing works excellently even completely detached from Madame Bovery. When Martin tries to manipulate Gemma's life from the background, turning himself into a kind of modern Flaubert, it reveals not only his deep-seated disappointment with his own life, but also Gemma's enormous lust for life, which her husband Charles can only match to a limited extent. The complications that ensue are at first highly amusing and exciting, but then take on increasingly sinister features.

What they are, of course, shall not be revealed. But it should be revealed that Fontaine succeeds very well in coherently realizing the changing tone of the story without the audience having to leave the cinema frustrated at the end. Because even in the more dramatic moments, she maintains the basic ironic atmosphere, which works quite wonderfully thanks to the very good actors. And even if the events in the last third seem a bit depressing, at the latest the wonderful final scene makes sure that a broad grin forms on the faces of the audience.

Gemma Bovery may lack the last kick to make a very good film into a great one. There are some too obvious lengths and minor dramaturgical hangs in the middle section for that. But all in all Anne Fontaine succeeds in making a wonderfully biting comedy about literature, love, passion and obsession, which convinces with beautiful pictures, profound humor and good actors. And for that there is a very clear: Worth seeing!