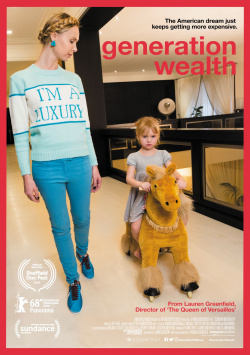 Once upon a time, US photographer and director Lauren Greenfield wanted to draw attention to hunger and suffering in various parts of the world with her work. Maybe one could change something with it. But the hoped-for commission failed to materialize. She only got it when she took pictures of rich kids in LA. Since then, Greenfeld has been preoccupied with wealth and materialism. For 25 years, she has immersed herself in a world of decadence and luxury. A world where the only thing that seems to matter is self. Now she has portrayed the Wealth Generation in a documentary film that fascinates in a terrible way, that makes you angry, but also shows one thing very clearly: Money truly isn't everything in life.

Laura Greenfield has succeeded in making a film that is delightfully multi-layered and, in the end, self-reflective. The filmmaker doesn't just point a moral finger at people who seem to have lost any form of decency or compassion from their addiction to ever more material wealth, ostentatious status symbols and recognition, and punish those who have less with condescension or worse. With the imagery on display here, especially at the beginning, it would have been easy to reduce the film to such a message.

But Greenfield tries to do more. She tries to look behind the glamorous facades. She shows people who have either been destroyed by the addiction to fame and money, or for whom a lot of money has also not brought the happiness they hoped for. This ultimately leads them to question themselves and their work a bit, which adds another interesting layer to the film. And so, in the end, perhaps a very different message comes out than one would have expected at the beginning of the film.

Generation Wealth puts its finger in a deep wound of our society, where likes and Instagram followers seem to matter more than true friendships, in a stirring, moving and thoroughly fascinatingly entertaining way. A film that not only shows the ugly face behind the beautiful appearance, but also the deeply human sides that are all too easily overlooked. An interesting and in parts quite important documentary that more than deserves its Absolutely Worth Seeing.