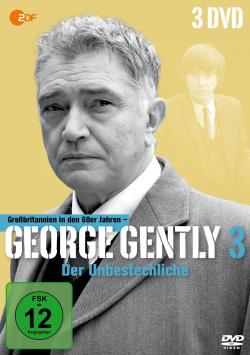 Content: Only a few weeks after the second DVD box of George Gently- The Incorruptible has come into the trade, edel:Motion follows with Box 3. As on the previous two box sets, this one again features three new cases from 1960s England with the great Martin Shaw in his signature role as Chief Inspector George Gently.

Just before the British House of Commons elections, Patrick Fuller, foreman of the local mill in Rinton, is found dead. Everything looks very much like a suicide, but soon the evidence thickens that Fuller was murdered. Local Labour MP Geoffrey Pershore, who had once bought the mill from Fuller, becomes the target of Gently's investigation, as does secretary Julie (Kate Heppel), with whom Fuller appears to have been having an affair. But in truth, it was the wife of miller Henry Blythely (Nicholas Jones) with whom Fuller had been having an affair. A motive for murder? Just when the case seems to be solved, a new discovery about the mill's finances brings a surprising twist.

An episode with high goosebump factor: when Domenica Charlton is found beaten to death, her ex-husband and father of their 13-year-old daughter Agnes (Natalie Garner) seems to be the only suspect. And indeed: the man quickly makes a comprehensive confession. Months later, a search party is formed after a child abduction, including Darren Paige (Shaun Dooley), Agnes' uncle. In their investigation, Gently and Bacchus realize there is a connection between the two cases. But what terrible resolution will be revealed to them the men do not yet suspect.

England is all about the 1966 World Cup. But Gently and Bacchus have no time to enjoy the games. For Fraser Barrett, left-leaning lecturer at Durham University, is fished dead from the dock. And student Elizabeth Higgs, with whom Barrett had one of his many love affairs, is missing. The trail leads the two cops to the university campus, where a conservative janitor and an emancipated professor are supposed to be helpful to them. But in an atmosphere heated by the Soviet Union's participation in the World Cup, the investigation proves extremely difficult.

What makes these three new episodes so worth watching is not just the thrilling cases and atmospheric set, but the steadily more complicated relationship between Gently and Bacchus. The appearance of Bacchus' wife and the young policeman's marriage, which threatens to break up, provide plenty of fuel for the fire, as do his constant attempts to conduct the investigation behind Gently's back in his own unique way. Highlight of the third box is undoubtedly the episode The Seed of Evil, which can generate extremely high tension and a proper goosebumps until the end. If you liked the first cases of Gently and Bacchus, you can not pass this box!

Picture + Sound: In comparison, there are no major changes here: the picture is consistently on a good TV level, alternating high detail sharpness and some slightly washed out moments, which are particularly noticeable in darker moments. The audio remains largely restrained, with dialogue in the German version coming across as a little more front-heavy and powerful, though also a little less harmonious, than in the original English version. Good!

Extras: Unfortunately, there is no change from the first two boxes here either. Box 3 also has no bonus material to offer apart from trailers from the provider. Too bad!

Conclusion: George Gently proves again in these three cases as British crime entertainment of the particularly entertaining kind. The good actors, the engaging 60s feeling and the exciting cases make this box set also absolutely recommendable despite the lack of bonus material!