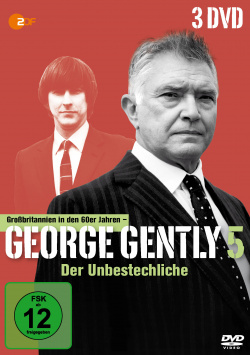 Film: Long "George Gently" didn't have to wait for a sequel after the release of season 4. Just under a month later, season five came into the stores. And she really has it in her. The three new cases are not only extremely exciting, they are also very personal. For example, "Blinder Hass" deals with a particularly tragic case of racism. Since the police don't enjoy a very high trust among the colored population, John Bacchus (Lee Ingebly) has to investigate undercover - and he falls in love with the witness Carol (Lenora Crichlow, known from the series "Being Human"). And Gently himself gets into "mortal enemies" under suspicion of being corrupt, which, however, is only the beginning of a perfidious revenge plan against the policeman. The finale of this episode and thus also the season is hardly to be surpassed in tension.

Some great guest stars like Eamonn Walker ("Chicago Fire", "Oz - hell behind bars"), Helen Baxendale ("Friends", "Anonymus"), Mark Gatiss ("Sherlock") or "Lewis - Der Oxford-Krimi" star Kevin Whatley also make sure that these three episodes are not only dramaturgically, but also theatrically really worth seeing crime food. Also, the relationship between Gently and his young partner Bacchus becomes more and more interesting and it seems that the events from "Deadly Enemies" will shuffle the cards anew.

The series is also convincing again in other areas. For example, the camera work creates a sometimes very oppressive, extremely gripping atmosphere and the equipment ensures that the late 1960s are brought to life in a believable way. It's also nice that despite many very dramatic and dark moments there is always time for some loosening up. When Bacchus prepares himself for his undercover assignment by practicing dancing in his office and is of course surprised by Gently, it's a pleasantly humorous sequence in a rather stirring episode due to the unfortunately still very topical racism debate.

All in all, Season 5 can maintain the high level of its predecessor squadrons. Lovers of first-class British crime food will get their money's worth thanks to the charismatic main actor and the good scripts. And the last act of "mortal enemies" should not be missed by "George Gently" fans. So it's quite clear again that this fifth box is absolutely worth seeing!

And that's what the three new cases are about:

The murder of the colored young Dolores, found with their skulls smashed on a wasteland, confronts Inspector George Gently and Sergeant John Bacchus with their own prejudices and xenophobia in a British society marked by fear and demarcation in 1968. Of course, Sergeant Bacchus immediately assumes that the young woman must be a prostitute. But it soon turns out that she lived with her brother Joseph and her father Ambrose Kenny, a bus driver, and worked in a laundry. In contrast to his son, who immediately thinks of a racially motivated murder, Ambrose, who came to Great Britain from Trinidad-Tobago and served with the Royal Air Force as a bomber pilot in World War II, is completely convinced of his daughter's innocence. Since Dolores and her best friend Carol regularly attended the dance event "Northern Soul" on Saturday evening, Inspector Gently sent Sergeant Bacchus on his first undercover assignment. Bacchus is fascinated by the feverish, energetic and exuberant atmosphere there: The young people dance all night long to black music, soul, which is not played anywhere else, and exchange their records. To Carol he forms delicate bonds to find out more about her friendship with Dolores and a possible motive for the crime. The boundaries between official police action and private interest are becoming increasingly blurred, which Gently observes with concern. The fact that the organizer of the party, the fish seller Gary Watts, is the eldest son of the well-known criminal right-wing populist Bernie Watts, makes the investigation explosive. John comes to the aid of DJ Charlie, who is beaten up by Gary and a horde of strangers, and learns from him that he was Dolores boyfriend and that Gary is his brother. The autopsy report reveals that the young woman was three months pregnant. And Carol confides to John that the married one was stalking Gary Dolores. Did Dolores fall victim to a feud between the Watts brothers? Against the backdrop of the heated atmosphere of the British government's controversial Race Relations Act, Gently and Bacchus are trying to bring light into the dark. (Text: ZDF)

Stephen and Frances Groves report their baby Faith missing. Both are heartbroken about the loss, Stephen also makes himself big reproaches. Inspector Gently and Sergeant Bacchus immediately initiate a large-scale search, as the culprit apparently entered the family home in broad daylight in an unobserved moment. There is no ransom note. When Gently is surprised that the Groves are no longer such young parents, it becomes clear that Faith was adopted. Their way leads Gently and Bacchus therefore into the home of the resolute and strict Esther Dunwoody, the single young mothers, who have become unintentionally pregnant, gives the possibility to give birth there and to release their children for adoption. Faiths' biological mother Susan Faulkner came to the home for the birth of her twins, but left after her daughter's adoption in a night and fog action with her son Thomas. Gently and Bacchus find out where the 17-year-old is hiding and interview her. But Susan neither knows the Groves, nor has she told the biological father of her children anything about the pregnancy. She deeply regrets that she gave Faith away, but she knows nothing about her right to cancel the adoption within a certain period. Gently and Bacchus have this to cause them to take another close look behind the facades of the Dunwoody mother's home. Under the guise of welfare, did its director conduct unscrupulous business with the desperate? At the same time, Bacchus receives a newspaper article: Stephen Groves became known six years ago for preventing a robbery of the bank where he worked. Groves had affairs afterwards, his marriage to Frances was in crisis. And he didn't want to adopt Faith. Gently senses that Frances also seems to be hiding something. Baby Faith still alive? During his investigations Inspector Gently encounters a well-kept secret that has led to immeasurable suffering to this day as the starting point for the chaining of fateful decisions. (Text: ZDF)

Highly criminal professional Melvyn Rattigan was sentenced to 30 years in prison thanks to Inspector George Gently. All the more stunned, Rattigan relies on the news that Rattigan is appealing on the grounds that he had had a corrupt business relationship with Gently, who therefore manipulated evidence against him and was guilty of bribery in office. As quickly as the loop around the Inspector's neck tightens, Sergeant Bacchus comes into the focus of shady cops of the London Metropolitan Police: They claim that Gently is suspected of murdering a missing colleague who infiltrated the illegal slot machine scene in Newcastle. Bacchus - torn between his loyalty to Gently and the ever more enigmatic "evidence" of his guilt that emerges from everywhere - desperately seeks a way to shed light on the darkness. After a short time he begins to doubt the true motives of Sergeants Lawson and Stratham. After an attack on his life, George Gently suddenly has only two allies on his side: Rattigan's lawyer Gitta Bronson, who represented him in the trial but interpreted his suspicions of Gently as a perfidious revenge plan, as well as his old Met colleague Don McGhee, to whom he turns to ask him for a self-defense weapon. Gently, who had to leave London to the north for his ideals and his fight against corruption within the Metropolitan Police, suddenly falls victim to his convictions. Although on the run, Gently tries to restore his reputation and place the merciless opponent in his own ranks. (Text: ZDF)

Picture + Sound: Compared to the fourth season, there are no differences: The picture on the DVD is very clean, the overall sharpness is on a good level and, in contrast to earlier seasons, there is hardly any loss of quality even in the darker moments. The colour scheme is very harmonious and captures the 60s atmosphere of the series very well. The sound is available in a powerful stereo mix that lets the dialogues and the music sound very centrally from the speakers. Smaller sound effects and atmospheric ambient noises have been well tuned to create a TV-appropriate sound backdrop. Good!

Extras: As a bonus there is an entertaining look behind the scenes (approx. 13:33 min.), where not only the two main actors, but also some members of the team (e.g. make-up) have their say. This worth seeing short documentary is available in English original without subtitles.

Fazit: The fifth season of "George Gently - Der Unbestechliche" offers three more first class thrillers, whereby the season finale can score with a really dramatic last act and waiting for season 6 will make unbearable for fans. Extremely rousing and exciting cases that are well played (among others by the top-class guest star Eamonn Walker) and atmospherically densely staged. No question: the season finale is one of the highlights of the series so far, which is why this box is absolutely recommendable for fans and all lovers of first-class British crime food - especially since this time there is also a little bit of bonus material!