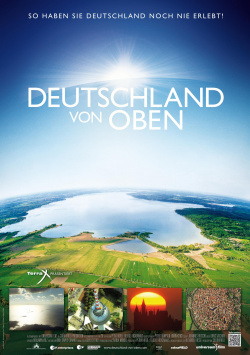 Whether large cities or vast expanses of pastureland, whether high mountains or the fascinating Wadden Sea, whether industry or almost untouched nature, whether highways or places almost inaccessible by normal road - Germany has all this and much more to offer. The country has an incredibly diverse nature and a fascinating infrastructure. Petra Höfer and Freddie Röckenhaus have already managed to show Germany from a very special perspective in the successful Terra X series Deutschland von Oben (Germany from above), which thrilled an audience of millions. This success is now to be repeated in the cinema version of the same name.

Fascinating aerial shots were captured with a Cineflex helicopter camera, taking the viewer on a journey through a year in Germany in almost two hours. From the snowy summit of the Watzmann to the skyline of Frankfurt to the dunes of Helgoland, from Lake Constance to the steelworks at Duisburg to Sylt, the images that the viewer gets to see here capture the beautiful sides of Germany very well and also only unfold their full potential on the screen. There are some particularly fascinating moments that really make you want to visit the different corners of Germany.

This all sounds like a great nature documentary. That may be true in parts. But the film has to fight with some large problems, which clearly diminish the positive overall impression. Without question, the most negative is the accompanying commentary, spoken by Benjamin Völz. Völz, who has lent his voice to stars like Keanu Reeves and David Duchovny, is a very pleasant narrator. But the words put into his mouth here are sometimes just awful and dripping with pathos, which is then reinforced by the bombastic film music in a rather unpleasant way. The similarly structured documentary Die Nordsee von Oben (The North Sea from Above), in which the pictures were commented with a lot of irony and charm, is a good example of how even Deutschland von Oben could have gained in entertainment value through the commentary. But this way, less would have been much more.

The second problem is that quite a few shots seem like unnecessary filler. It is certainly interesting to show the flight path of migratory birds by means of animations. But at some point such additional information simply loses its appeal. As a viewer, you would rather see more of the land itself and not, as in countless nature documentaries before it, observe birds or ibexes in great detail. Granted, scenes like the one in which a base jumper jumps from a Frankfurt skyscraper and then flies over through the skyscraper canyons to the Taunusanlage partially compensate for some of the lengths. But the impression that the film would have benefited from a shorter running time still lingers in the end.

Germany from Above has some quite wonderful moments to offer. The work of the filmmakers, helicopter pilots and technicians must definitely be acknowledged as great. Nevertheless, the opportunity to offer the viewers something very special was given away by too much pathos and especially by too much ordinary filler material. Had the documentary limited itself to the fascinating aerial shots and chosen a slightly less intrusive commentary and more restrained music as background, the film would have been a must-see for all those who already liked the TV original. But so the whole thing can be recommended to lovers of nature documentaries only conditionally.

Cinema trailer for the movie "Germany from above (Deutschland 2012)"
Loading the player ...