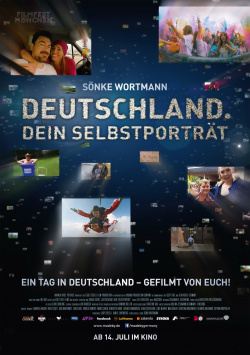 On July 24, 2010, the production company of cult director Ridley Scott, together with the online portal YouTube, called on users around the world to capture special moments of that day on camera and upload them to YouTube. 80,000 contributions from 190 countries with a total running time of over 4,500 hours were the impressive result. Director Kevin Macdonald (State of Play, The Eagle of the Ninth Legion), his executive producer Ridley Scott, producer Liza Marshall and an intrepid team of collaborators edited together a kaleidoscope of a day on our planet from this wealth of footage.

The success of Life in a Day - A Day on Our Earth was followed by spin-offs from Japan, England, Italy and India. With Germany. Your Self Portrait, a day in the life of Germans is now being brought to the big screen. Under the direction of SÃ¶nke Wortmann, more than 10,000 contributions filmed on 20 June 2015 with a video camera, tablet or smartphone were viewed and edited together into a sometimes amusing, sometimes moving, sometimes interesting and sometimes trivial whole. There were few requirements for the participants in the project. They were simply asked three guiding questions: What makes you happy? What are you afraid of? What does Germany mean to you? Otherwise, however, the rule was: just film away.

While most of the scenes are very short and only present brief snapshots, some participants are given more time. These longer contributions, which are divided into short scenes scattered throughout the film, are some of the stronger moments of Germany. Your Self-Portrait. Even if they seem as if they were directed by professional documentary filmmakers, thus somewhat weakening the personal, simple character of the project, they simply tell the most exciting stories The short clips that otherwise dominate the film, after all, simply seem tedious in the long run.

The problem is that the concept of Life in a Day - A Day on Our Earth will not easily translate to individual countries. After all, the appeal of the original project was to show not only the differences, but more importantly the many similarities between people from different countries and cultures. If you take this point out, the whole thing quickly degenerates into a long-winded selfie show of the kind you can admire hundreds of times a day on YouTube. Of course, the makers of the Germany version have tried to show how colorful and diverse our society is. But this is unfortunately done very hesitantly, one-sided and yet also arguably clichÃ©d, which is why this aspect doesn't really work. Rather, Germany. Dein Selbstportrait rather wants to convey an image of Germany as the makers would like it to be - which does not always correspond to how it really is.

Be that as it may, despite all the criticisms, Deutschland. Dein SelbstportrÃ¤t has some very nice scenes to offer, at which one can laugh heartily at times. The best of these scenes, however, is hiding in the end credits. Here a little boy is observed discussing with his dad simply hilarious! Because of such moments, the bottom line for a visit to the cinema is just: Recommendable!

You can find more info about the film HERE.

Cinema trailer for the movie "Germany. Your Self-Portrait (Deutschland 2016)"
Loading the player ...