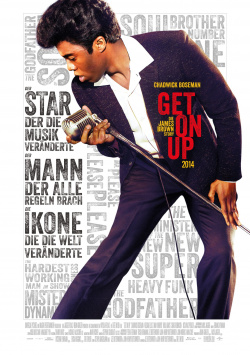 He was the Godfather of Soul, who not only became immortal himself through his music, but left a lasting mark on the entire music business. To this day, he is one of the most sampled musicians of all time. We are of course talking about James Brown, to whom The Help director Tate Taylor has now created a cinematic memorial with the biopic Get On Up. Jumping back and forth between different decades, Taylor recounts Brown's (Chadwick Boseman) difficult childhood and adolescence, an early stint in prison, and his first encounter with gospel singer Bobby Byrd (Nelsan Ellis, True Blood), whose singing troupe he joins - the beginning of a deep friendship and a world musical career. The most important stages in this career, such as James Brown's history-making performances in Vietnam or after the assassination of Dr. Martin Luther King Jr. can of course not be missed here, as well as the birth of global hits like I feel good or Sex Machine.

Get On Up strictly follows the rules of the genre from the first minute. Anyone who has seen other biopics like Walk the Line or Ray will clearly recognize the formula by which these films are knitted. So the cinematic treatise of Brown's life, exciting as it may have been, doesn't really offer much new. The darker side of the artist, such as drug abuse and violence against his wife, is only hinted at. True, by the final act, Brown is no longer the sympathetic figure he might have been at the beginning. Still, Taylor doesn't dare to give a truly nuanced portrayal of the character. Chadwick Boseman, who had already impressively embodied a famous character in the baseball drama 42, is largely able to make up for this weakness with his strong performance. Still, in the end you are left with the feeling that James Brown the man and artist was very much more layered than this film shows.

Besides that, Get On Up is a really good biopic with all the strengths and weaknesses that come with it. The strengths undoubtedly include the very good cast, the coherent set and, of course, the great music that immediately drives into your legs and makes it almost impossible to sit still in the cinema seat at some moments. Among the weaknesses is the fact that some parts of the biography are naturally tightened and superficially dealt with or even completely omitted due to time constraints. However, since Taylor sets a coherent pace overall and he deftly avoids unnecessary length, this shortcoming, which has tripped up many a biopic, only carries a slight negative weight.

With a not always entirely coherent mix of humor and gritty drama, rousing musical interludes and stirring camerawork, Get On Up manages, on balance, to leave a thoroughly positive overall impression. You don't have to be a fan of James Brown to be well entertained here, but those who really love the music of the Godfather of Soul will of course get their money's worth and realize what an excellent performance Chadwick Boseman delivers. Therefore, all in all: not quite a masterpiece, but a worthy memorial for a great artist. With small deductions absolutely worth seeing!