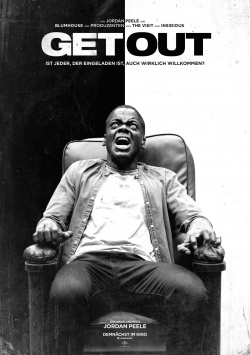 Chris (Daniel Kaluuya) doesn't have a good feeling about this visit: his girlfriend Rose (Allison Williams), a white girl from a good home, wants to introduce him to her parents (Bradley Whitford and Catherine Keener) as her first black boyfriend. You don't see people of color that often in the posh town where the couple lives. But in fact, Dean and Missy seem very open-minded. Still, after their arrival, mysterious occurrences begin to pile up. The family's two servants act strangely, as do the guests at a big summer party being thrown at the estate that weekend. But Chris doesn't let his suspicions show. But when Missy tries to get him to quit smoking with the help of hypnosis, things get really scary. But by then it's long too late.

Get out is the first big surprise hit of the year. Surprising already alone due to the fact that one would not have expected from Jordan Peele, who is known especially in the USA primarily as a comedian, as a directorial debut necessarily a film, which can definitely be attributed to the horror genre. But it's also surprising because he manages to deal with the current racism problem in the USA, but also in many other countries, in a way that is both profound and entertaining. With a mini-budget of less than 5 million dollars, the film has so far grossed almost 200 million dollars worldwide, clearly eclipsing many an expensive blockbuster.

The reason for this success is easy to pinpoint: Get out is just a really good movie. Peele convincingly manages to blend several elements into a coherent whole. His debut is as much a wicked satire as it is a solid mystery thriller, culminating in a bloody horror scenario of the more absurd kind towards the end. But even in the more absurd moments the film has something to say, which it doesn't do with a raised forefinger or with a moralistic sledgehammer, but in a subtle and very entertaining, sometimes even thrilling way. This is a small feat, which you have to credit especially to a directorial debut.

Sure: Right after the opening sequence, but at the latest with the arrival at Rose's parents, Peele builds up a somehow oppressive basic atmosphere, which can't be disguised even by the many humorous dialogues and bizarre moments. That's what allows the little shock moments, as well as the scenes that are meant to be genuinely terrifying, to work so well. The difficult balancing act between humor and horror is really masterfully done here.

In addition, the twist that is accomplished in the story (and which the trailer unfortunately already reveals too much about) is really original. It's true that you quickly get an idea of the direction it might take. But what it's really about in the end is truly an idea that hasn't been overused yet in the very versatile horror subject. No question: If you like it really bloody and creepy, you're in the wrong movie here. But if you are looking for a thrilling, good story, told with bitter humor and carried by very good actors, you should not miss this genre highlight. Get out? no, rather Get in!! Because this film is: absolutely worth seeing!