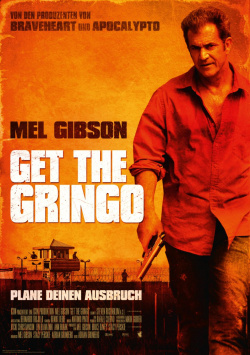 Actually, it should be a sure-fire thing: Driver (Mel Gibson), along with his accomplice, has bagged no less than four million dollars and planned to flee across the Mexican border with the loot. But now his partner is sitting next to him riddled with bullets and the police are hot on their heels. Although Driver manages to make it across the border with a daring stunt, this is where his problems really start. Because the Mexican police, who are already waiting for the crook on the other side, actually want to hand him over to their US colleagues. But when the lead cop discovers the money in the car, he prefers to keep the gringo and the loot for himself. Driver ends up in the prison town of El Pueblito, where from then on he must constantly fear for his life. But he wouldn't be the cunning crook he is if he didn't find a way to make money even here and plan his escape in peace. He gets the help of the little Kid (Kevin Hernandez), who lives with his mother (Dolores Heredia) in El Pueblito. And soon even the meanest gangster realizes: you'd better not mess with the gringo.

Mel Gibson has unfortunately made headlines in recent years less with his films than with his private life. And primarily in an extremely negative way, which is why he has fallen out of favor in Hollywood and is considered extreme box office poison. Although his acting was quite convincing in Jodie Foster's drama The Beaver, he was not a success at the box office. That may be one reason why his latest film, Get the Gringo, didn't even make it to theaters in the U.S., and why it's only being sold off as a DVD premiere in other countries as well. That's a shame, because this blackly humorous action thriller is really something to behold. You can think what you want of the private man Gibson, but here he is still as cool and entertaining as ever. Whether it's during the action sequences or his wry off-camera commentary, Mel Gibson is ideally cast as the sly gangster in this film.

Director Adrian Grunberg, who has worked with Gibson before in Revenge for a Contract and Apocalypto, doesn't dwell on the story in his feature debut. The viewer is catapulted straight into the fast-paced chase near the Mexican border. And it quickly becomes clear: this is not only fast-paced and bloody, but also pleasantly ironic. And this tone is also maintained in the Mexican prison town, although there are also clearly darker moments here. But instead of dragging the viewer down with dreary realism and rampant violence, Grunberg manages to keep the entertainment value at the forefront at all times, even in this setting.

Get the Gringo doesn't even try to be particularly ambitious. True, themes of oppression, corruption, and juvenile delinquency are woven into the story without being trivialized or ridiculed. Still, the film's main goal is to be fun, and it succeeds really well at that, even with minor sacrifices. It offers action, humor, a cool hero and probably one of the most unusual prisons in film history. Sure, the wheel is not reinvented here and maybe the whole thing is a little too old-fashioned to still be able to attract the masses in the cinemas. But if you appreciate solid action with just as much irony as blood, you shouldn't miss this entertaining work. Worth seeing