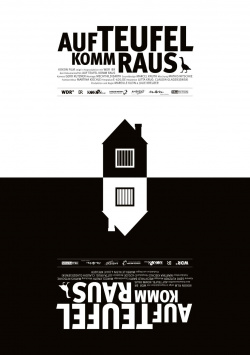 Get the hell out of here

Karl D. is a convicted sex offender. He is said to have committed several cruel crimes against young girls. He has just served a 15-year prison sentence, but is still considered dangerous. When his brother Helmut takes him in at his home, the rural idyll quickly turns into a bubbling witch's cauldron. Daily vigils are forming around the family house, the tone, which is directed against Karl D., but also increasingly against Helmut and his family, becomes rougher every day. Helmut in particular has to suffer under the enormous pressure, which also does not remain hidden from a group of demonstrating women. They begin to question the meaning of their actions and decide to seek a conversation with Helmut, but also with Karl D. - and thus threaten to become socially marginalized themselves...

The documentary "Auf Teufel komm raus" by Mareille Klein and Julie Kreuzer is an enormously difficult undertaking at first glance. On the one hand, however, the film does not want to take part in the witch hunt for the child molester. On the other hand, Karl D.'s deeds should neither be excused nor played down. Both sides, the demonstrating village community on the one hand, Karl D., Helmut and his family on the other, should be illuminated as neutrally as possible. This success is not only due to the two filmmakers, but also to the protagonists, who agreed to be accompanied by the camera.

The result is a shocking testimony to the decay of a community, but also a critical look at our legal system and at the human spirit, which can reveal its particularly dirty side in the face of threat. The sometimes very moving interviews with demonstrating women who have themselves become victims of violence and who are reminded by Karl D. of these traumatic events make the protest against the sex offender quite understandable. On the other hand, the sometimes just shabby and abysmally malicious behavior against Helmut and his family, but especially against the women who try to smooth the waves by seeking conversation, is simply repulsive, cowardly and not excusable.

With every continuous minute more and more anxiety is spreading and the viewer really feels how the situation is getting worse and soon it becomes clear: even if Karl D. has to go back to prison and Helmut and his family move away, life in this village will never be the same again. Especially since the view of the filmmakers remains rather neutral, the film achieves an extremely high emotionality, doesn't seem manipulative or suffused with one-sided morality. Quietly and subtly, it reveals how important it is to preserve humanity even in the face of terrible crimes. An extremely moving documentary that will probably leave no one cold - and that's exactly why "Auf Teufel komm raus" is absolutely worth seeing!