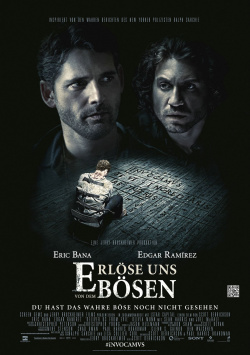 Deliver us from evil

A mother who throws her young child into a lion enclosure at the zoo for no apparent reason, a family terrified by eerie noises coming from their basement, a violent ex-soldier, and strange characters that keep popping up - it's a whole series of disturbing and sinister missions that NYPD Sergeant Ralph Sarchie (Eric Bana) and his partner Butler (Joel McHale) are called to in short order. It quickly becomes apparent that there is a connection between each of the cases, which seems to be directly related to an operation in the Iraqi desert four years ago. As the events increasingly gnaw at Sarchie's psyche, causing his wife Jen (Olivia Munn) and daughter Christina (Lulu Wilson) to suffer as well, unorthodox priest Joe Mendoza (Edgar Ram&iacute;rez) offers to help him solve the case. For Mendoza is certain that demonic forces are at work here. Sarchie doesn't want to hear about it at first, but soon he too must realize that the events can no longer be explained rationally.

Redempt us from evil is based on the notes of real-life New York police officer and later demonologist Ralph Sarchie, who wrote down his paranormal experiences in police service in the book Beware the Night. As with The Exorcism of Emily Rose, director Scott Derrickson has used the supposedly real events as the basis for a supernatural thriller, although this time the dark events are set not in the countryside but in the middle of New York, a metropolis of millions. And thanks to the atmospheric camerawork, this makes for an extremely gripping atmosphere that consoles over some logic holes and genre clichés.

Because the fight against demonic forces is not really original. Especially the main character, who first has to face his inner demons in order to be able to fight other supernatural forces, seems to be straight out of the exorcism movie textbook. However, the fact that Eric Bana delivers a more than solid performance helps to make the character of the cop scarred by his work quite interesting, despite the rather clichéd drawing. This is especially evident when Bana is acting alongside his movie wife Olivia Munn. Although Munn has shown acting talent especially in the series Newsroom, she does not manage, in contrast to Bana, to fill her very one-dimensional drawn character even rudimentarily with life.

However, even if all dramaturgical set pieces seem somehow familiar and the characters remain quite pale despite the good actors, Redeem Us from Evil has become a really exciting and worth seeing mystery horror thriller. As with The Exorcism of Emily Rose and most recently Sinister, Derrickson has once again succeeded in using the worn-out so effectively that you as a viewer just have to root for him - even if you actually already guessed where the journey is going. A few really good shock moments also increase the entertainment factor for genre fans. Admittedly, with just under two hours the film is simply too long and then also drags noticeably in some moments. A slightly tighter staging would certainly have intensified the positive effect.

But even with small lengths, Erlöse uns vom Bösen is far from boring. If you like exorcism thrillers, are comfortable with a dark, oppressive atmosphere, and just appreciate rock-solid suspense cinema of the supernatural kind, you'll definitely get your money's worth here. No masterpiece, but absolutely worth the money for the movie ticket!

Cinema trailer for the movie "Deliver us from evil (USA 2014)"
Loading the player ...