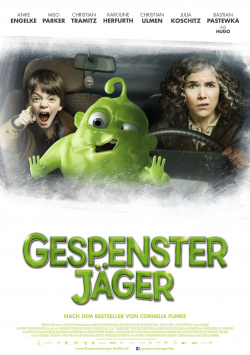 Of all things, when little Tom (Milo Parker) wants to prove to his annoying sister Lola (Ruby O. Fee) and his parents (Christian Ulmen & Julia Koschitz) to prove that he is not a scaredy-cat, the green slime ghost Hugo (voiced by Bastian Pastewka) gives him a huge scare in the gloomy basement. He learns from his neighbour that the ghost hunter Hedwig Kümmelsaft (Anke Engelke) could help him get rid of the ghost. But the grumpy woman, who just lost her job at the CGI (Central Ghost Hunting Institute), has no desire to help the boy - especially since his ghost is only a MUG (Medium Unheimliches Gespenst). But when Tom befriends Hugo and learns that he only has seven days to return him to his old haunt or it will disintegrate forever, he urges Mrs. Caraway Juice to help him after all. Because the new inhabitant of Hugo's haunted place is apparently an UEG, a prehistoric ice ghost. And only a real professional can chase him away. But the boy and the ghost hunter have no idea just how great the danger posed by the UEG is, not only for Hugo, but for all mankind...

.With Ghostbusters, the film adaptation of Cornelia Funke's bestselling children's book Ghostbusters on an Icy Trail, director Tobi Baumann (The Wixxer, Pastewka, Add a Friend) has staged a funny and exciting adventure film for children aged 8 and up. The international co-production, shot in English, borrows rather uninhibitedly from films like Men in Black or Ghostbusters. But the fact that it's just a good copycat and that it doesn't really have any ideas of its own will probably only bother older viewers who know all the films it quotes. The same goes for the fact that a closer look quickly reveals that the film wasn't always lip-synced into German. But the target audience is unlikely to be bothered by these criticisms.

A few young book reporters accompanied me to the press screening. The four girls were absolutely thrilled with the film. In their opinion, there was a lot of laughs, but at some points it was also a bit scary. But first and foremost they had a lot of fun, especially with the numerous ghosts in the CGI and of course with the lovable Hugo. And in fact, not only because of the cute animation, but especially because of Bastian Pastewka's delightful dubbing, it's hard not to have a hearty laugh at the slimy MUG over and over again. The weak points that I had to criticize in the film were not even noticed by the children. This doesn't make the weaknesses go away, but they become rather secondary to a critique.

Naturally, Baumann grinds out all the clichés here, from the annoying big sister to the parents who are completely batty in their efforts to provide the perfect upbringing to Mrs. Caraway's ex-colleague who is driven by his oversized ego. But at the same time, children are also given plenty to identify with. Tom's fears, or even his despair at not really being taken seriously by his family, turn the boy into a normal kid whose heroic transformation can then inspire young viewers all the more.

Thus, it can be said that Ghostbusters may not be the most original film of the year, and that the imaginative ghost comedy is unlikely to send viewers over 14 into raptures. But for kids 8 and up (younger ones might still get too creeped out at some points), the film is a wonderfully fun adventure that deserves a very clear "worth seeing" rating!

Cinema trailer for the movie "Ghostbusters (Deutschland/Österreich/Irland 2015)"
Loading the player ...