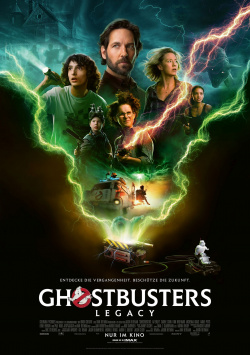 When they get kicked out of their city apartment, Callie (Carrie Coon) and her kids Trevor (Finn Wolfhard) and Phoebe (Mckenna Grace) are forced to move into the old farmhouse in the hick town of Summerville that was left to her by her recently deceased father. While Trevor is anything but enthusiastic about the new life in the small town, Phoebe explores with interest the old house of her grandfather and comes across a fascinating secret: He once belonged to the Ghostbusters, who had saved New York from a ghost invasion in the 1980s. But why had he broken with his former team and chosen a hermit's life here in the middle of nowhere? The answer to that question had better not be sought too intently, for a danger lurks in an old mine near the city that Phoebe's grandfather had tried unsuccessfully to subdue....

So there you go! As a huge fan of the "Ghostbusters", I was bitterly disappointed by the 2016 reboot. No, not because the main roles were portrayed by women. That could have totally worked if director Paul Feig understood what made the original film so successful. No, he preferred to rely on below-the-belt humor and the hope that gags will be better if they're delivered as loudly as possible. There were a few nice laughs, but overall the film was extremely disappointing. Now, however, Jason Reitman, son of the original films' director Ivan Reitman, has taken on the franchise. And since his film is a true family affair, the theme of family is then at the heart of the story in this remake as well.

Quite clearly: "Ghostbusters: Legacy" is a declaration of love for the original and for 1980s family-friendly fantasy cinema in general. It's clear from the first moment that Jason Reitman wanted to make a movie for fans. This can be criticized in that there are few really new ideas besides numerous allusions to the original. Especially in the last act, many aspects from the first film are taken over almost directly. A little more courage to break away from his father's work might have done Reitman's contribution to the franchise good. But since there's no attempt at all to hide the overt fan service here, and since this blend of sequel and reboot bows extremely charmingly and respectfully to the original, the lack of independence really doesn't stand out in a negative way.

The characters are all endearingly drawn, which the young cast in particular executes perfectly. Mckenna Grace captures the essence of her movie grandfather so wonderfully that it is simply a great joy to watch. "Stranger Things" star Finn Wolfhard is right up there with her, as is Logan Kim, who almost perfects the classic sidekick role as Phoebe's friend Podcast. The young cast is supported by Paul Rudd, who once again shows great comedic talent as an unconventional teacher. Not to be left unmentioned is Carrie Coon, who plays her role with delightful sarcasm. And then, of course, there are the many cameo appearances, which, by the way, continue through the end credits. So don't leave the cinema too early, there are still two scenes during the end credits that are really worth watching, especially for fans.

I'm extremely happy that Jason Reitman managed to capture the spirit of the original so well and transfer it to a family film. "Ghostbusters: Legacy" is a nostalgic trip and a more than worthy season finale that serves fans of yore (who will definitely shed a tear or two towards the end) just fine, while also making the franchise accessible to a whole new generation. One can only hope that if "Ghostbusters: Legacy" is a huge success, more installments of this quality will follow. A perfect example of how to respectfully revive an old franchise and therefore: absolutely worth seeing!!