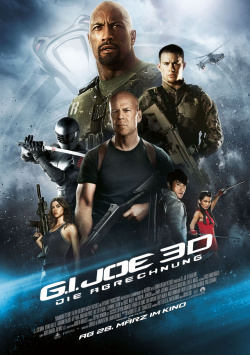 Copyright: © 2013 Paramount Pictures. All Rights Reserved. Hasbro and its logo, G.I. JOE and all related characters are Trademarks of Hasbro

The toy soldiers are on the road again. Three years after G.I. Joe - Secret Mission Cobra, G.I. Joe 3D: The Reckoning, the second feature film based around the popular action figures from Hasbro, is now coming to theaters. But since most of the cast has been replaced, with Channing Tatum, the star of the first part, leaving after just a few minutes, and the story is also only very loosely based on its predecessor, the whole thing feels less like a classic sequel and more like an attempt to completely reboot the G.I. Joe movie franchise after the not-quite-successful first film. Whether that will succeed with this content-less action cracker, though, seems rather doubtful.

That's not so much because of the thin story, though, which, as the Transformers movies have already proven three times over, plays a minor role in a flick like this anyway. The G.I. Joe team gets caught in a mean ambush this time around, with almost all of the elite soldiers falling victim. Only Roadblock (Dwayne Johnson), the tough Lady Jane (Adrianne Palicki) and Flint (D.J. Cotrona) managed to escape the enemy alive. In search of the masterminds of the attack, the soldiers come on the trail of an incredible conspiracy: Zartan (Arnold Vosloo), leader of the Cobra organization, has managed to infiltrate the U.S. government and take on the appearance of the President (Jonathan Pryce). As such, not only can he disgrace the entire G.I. Joe team, he can also finally put Cobra's plans for world domination into action. And, of course, Roadblock and his companions must stop that from happening. With the help of General Joe Colton (Bruce Willis) and a small group of volunteers, they head into a battle that seems lost before it's really begun. But then they receive help from an unexpected source.

G.I. Joe 3D - The Reckoning was supposed to be a full box office release back in the summer of 2012. But after initial test screenings, the studio ordered some reshoots that would have Channing Tatum on screen a little longer. This didn't really help. On the contrary: since the scenes between Duke and Roadblock work really well and the chemistry between Tatum and Dwayne The Rock Johnson is absolutely coherent, Tatum's premature departure is all the more negative. Especially since D.J. Cotrona, whose Flint is supposed to function as Duke's quasi-substitute, remains shockingly colorless and absolutely interchangeable and can't really leave an impression at any moment. The same goes for the convoluted story, which somehow seems to be cobbled together a bit helplessly from various individual parts, which don't really want to make sense and create a coherent overall picture. Neither the way too short appearance of Bruce Willis nor the few successful 3D effects help.

There is no denying that some scenes have a high entertainment value and are absolutely worth seeing technically - as long as the brain activity has been kept down to a minimum. The action is really fun in most moments and also some pithy sayings and nice gags make for quite a good mood. Still, director Jon M. Chu (Step Up 2 + 3) just doesn't manage to make the movie seem big and really spectacular. Rather, the whole thing comes across as a rather expensive B-movie that doesn't even begin to reach the level of similarly styled blockbusters, such as the Marvel superhero movies, due to many unintentionally hilarious moments (watch out for the German-language signs outside the prison Storm Shadow is taken to, for example), grotty dialogue and a completely pointless story.

Who doesn't need much more for an entertaining visit to the cinema than that it really rumbles and crashes, that pithy guys flex their muscles or let their guns talk and that in addition some pretty decent special effects are offered, will certainly have a lot of fun with G.I. Joe 3D - The Reckoning. But if you also hope for a good story and really talented actors, who have more charisma than the G.I. Joe action figures, and expect a spectacle in Transformers style, you will be bitterly disappointed. Therefore: only conditionally worth seeing for fans of the first part!

Copyright: © 2013 Paramount Pictures. All Rights Reserved. Hasbro and its logo, G.I. JOE and all related characters are Trademarks of Hasbro