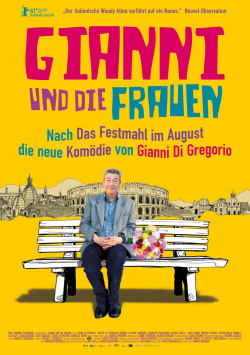 Gianni and the Women

After the success of The Feast in August, director, screenwriter and lead actor Gianni Di Gregorio stays true to the style of his directorial debut with his latest work Gianni and the Women. Once again, he plays a man named Gianni who suffers the whims of his mother (played once again by Valeria Di Franciscis Bendoini) and other women. For Gianni, who is divorced, truly doesn't have it easy: while his mother spends with full hands the money that should really be his, he has to support himself, his ex-wife and his daughter with his small pension. When he learns that an acquaintance of the same age is still having a passionate affair, Gianni too decides to finally add some fire to his life. But where is he to find the right woman? Whether it's his mother's attractive housekeeper, the newly divorced Gabriella or Valeria, his first great love - they would all be suitable for a romance. But instead of love and passion, Gianni experiences one setback after another.

First of all: if you liked The Feast in August, you will also like Gianni and the Women. That's because the films are so similar that this quiet comedy could very well be seen as a less than original sequel to Di Gregorio's directorial debut. There's no question that the film has some amusing characters and nice touches, but overall a certain sense of déjà vu dominates here, causing the film to lose much of its potential charm. Whether it's the often seemingly improvised dialogue, especially between Gianni and his mother, or the once again indulgent celebration of shared meals, many motifs from The Feast in August can be found here in very similar form.

Whether this is interpreted as a stylistic device of the director, or as a lack of imagination, is up to everyone. Fact is that Di Gregorio with his somewhat special humor is only aimed at a very small audience, which is well served here again, but not as charmingly enchanted as it was the case with the first film. And if you're looking for a typical romantic comedy with a lot of Italian flair and a little bit of verve, you'll only be confronted with high-quality boredom here anyway. Therefore, if you want more of The Feast in August, don't miss Gianni and the Women. But all others can safely look elsewhere for good cinema entertainment

Cinema trailer for the movie "Gianni and the Women (Italien 2011)"
Loading the player ...