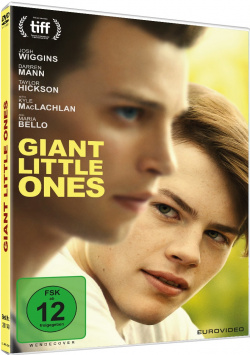 Movie: Franky (Josh Wiggins) and Ballas (Darren Mann) are best friends. They've been together through thick and thin for years, are among the most popular guys in school as stars of the swim team, and don't have a hard time with the girls either - in other words, a life many teenagers dream of. But that changes abruptly when the two boys become sexually close on the night of Franky's 17th birthday. After that, nothing is the same. Ballas is dismissive, tells Franky's girlfriend lies about that night, and spreads rumors around school. Suddenly, the once-popular boy faces nasty bullying attacks. But he also makes new friends. Like with his father (Kyle MacLachlan), who came out as gay a few years ago. Though the time is difficult, Franky realizes it's important in showing him his place in life.

Canadian director Keith Behrman's Giant Little Ones is a moving drama about friendship and self-discovery. Without wielding a moral club, the film follows a young boy as he searches for his own sexual identity. Some people around him find this admirable, others find it frightening. And this fear manifests itself in aggression, rejection and even violence. Because Behrman shows these dark sides very clearly, his film seems a bit more authentic than the similarly themed crowd-pleaser Love, Simon. What both films have in common, however, is the positive feeling they leave behind.

Even though Franky experiences bullying and violence, he doesn't let it get him down. He does make some mistakes along the way, but overall, what has thrown his life so completely off track makes him stronger in the end. Thanks to the very good performance of the actors the whole thing seems very close to reality and also comprehensible for the audience. In addition, it is to Behrmann's credit that he has given his film despite difficult topics again and again a certain lightness, which in the end not only the protagonist, but also the audience look positively towards the future.

Giant Little Ones is a very successful coming-of-age drama, which fortunately avoids too obvious clichés and instead can convince with a sensitive staging, very good actors and a beautiful story. For this, there is clearly a: Absolutely worth seeing!

Picture + Sound: The contrasts seem slightly exaggerated and the color scheme is dominated by bright tones. Image sharpness is at a good level, though details can seem a bit washed out, especially in darker moments. The audio is in a restrained Dolby Digital 5.1 mix, but this suits the mood of the story very well. For a small indie production like this, it's all perfectly satisfactory!

Extras: As an extra, in addition to the trailer, there is a short promo featurette (approx. 7 min.) with film clips and interviews.

Conclusion: Giant Little Ones, Keith Behrman's touching coming-of-age film, tells uninhibited and authentic stories about friendship, self-discovery and first great love. The drama manages to effectively wrap up heavy themes without crushing the viewer with an emotional heaviness. Instead, you are left with a very positive feeling at the end. The DVD is technically well realized, only the bonus material is a bit meager. All in all, however, there is for the film clearly a: Absolutely recommendable!