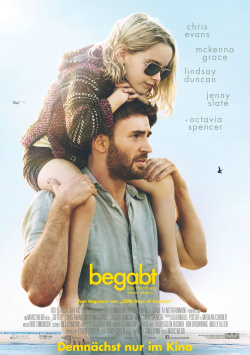 Gifted - The Equation of a Lifetime

Since the death of his sister, single Frank (Chris Evans) has been sacrificially caring for his niece Mary (Mckenna Grace). The girl is highly gifted, but Frank sees that as more of a curse than a blessing. He wants to give her a normal life where she can just be a kid for as long as possible. But when her teacher Bonnie (Jenny Slate) notices the girl's giftedness, Frank's mother (Lindsay Duncan) gets wind of it, too. And she's determined to do whatever it takes to make sure her granddaughter gets the best encouragement money can buy - even if it means taking her own son to court.

After directing two The Amazing Spider-Man movies, director Marc Webb is now cutting back hard in more ways than one. With a budget that probably went to catering for Spider-Man in a week, he's directed a small, moving film that relies not on action and special effects, but entirely on its story and its actors. Gifted - The Equation of a Lifetime poses a very important question: How far should the support of a child go? Does Frank, with his strict rejection of any kind of encouragement, make it possible for Mary to have a normal childhood for as long as possible? Or do we have to agree with his mother, who wants to guarantee the girl the best possible future and accepts that she can't do all the little things that children Mary's age are supposed to be involved with.

To admit, what the film offers as a solution and as an ideal is already a bit clichéd and also a bit cheesy. But that's not actually all that bothersome in the end. Because Webb's staging is still delicate enough to not feel too thick. Also, the fact that the script uses a little bit of lightening humor every now and then makes sure that the drama doesn't come across too overdone. The mixture is just right here, which is transferred very well to the screen by the actors. Chris Evans proves once again that he can do much more than just be Captain America. And little Mckenna Grace easily outplays her adult co-stars as the highly talented Mary. Although she comes across as a bit know-it-all at the beginning, which doesn't exactly earn her any sympathy points, she quickly makes it believable how difficult it is for her to navigate her environment and especially her school, and how much she suffers from the argument between Frank and his mother.

Gifted - The Equation of a Lifetime is a truly beautiful film that goes to the heart, but at the same time makes you very happy and entertains you very well. Despite some dramaturgically heavy moments, it's a pleasantly lightly directed family story that easily defies minor flaws and clichés with great acting and smart dialogue. And for that there is a very clear: Absolutely worth seeing!

Cinema trailer for the movie "Gifted - The Equation of a Lifetime (USA 2017)"
Loading the player ...