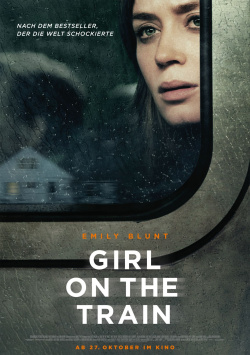 Girl on the Train

Every day Rachel Watson (Emily Blunt) takes the commuter train into Manhattan, and every day it stops within sight of a house where the perfect couple (Haley Bennett and Luke Evans) seem to live. For a few brief moments, Rachel is able to immerse herself in the happiness of these two strangers, which becomes a painful obsession for her. After all, she lived just a few houses down from her husband Tom (Justin Theroux) before he left her for his new wife Anna (Rebecca Ferguson), with whom he is now raising a child together in their home. When Rachel sees the young woman kissing another man through the train window one day, her dream world falls apart. As if in a trance, she gets off the train at her former home on the return journey - and gets caught in a web of lies, daydreams, hallucinations and murder.

Following the huge success of Paula Hawkins' novel, which has sold over 15 million copies worldwide, a film adaptation of Girl on the Train was really only a matter of time. Director Tate Taylor (The Help) and acclaimed screenwriter Erin Cressida Wilson (Secretary) have attempted to tell the convoluted story in a way that is suitable for the screen. In itself, they have succeeded well. However, the film adaptation lacks the necessary spice to make it more than a very conventional thriller drama.

The production is visually very atmospheric and also has quite a few solid moments of suspense - at least if you do not know the book template. But at the same time, as a viewer, you're also treated to a lot of very plodding, exhausting scenes. The so often coherent narrative flow is slowed down again and again because of that, especially considering the fact that it's the switching between time levels and different narrative perspectives that works so well. But even if this bestseller adaptation has not become the quite big hit, there is at least one aspect in which the thriller can fully convince: The cast!

Emily Blunt plays absolutely convincingly. Not only does she look extremely finished, but she embodies the broken, grief- and alcohol-stricken woman really well in other ways, too. But also newcomer Haley Bennett and Luke Evans deliver absolutely solid performances. They all prevent the script's weaknesses from fully developing and at least ensure that Girl on the Train offers decent entertainment. Sure, the story could have been told more grippingly and the good actors would have deserved a better movie. But since the director manages to build up a coherent atmosphere and to lay some false tracks, the rather boring moments of the flick don't really have a negative impact. And so: If you don't expect more than conventional thriller entertainment with three strong actresses, you can safely jump on this train. Worth seeing