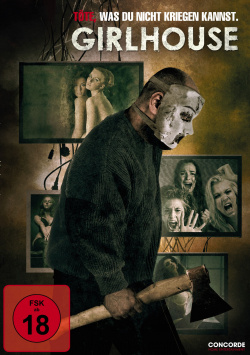 Film: What to do when money is tight and studying is extremely expensive? That's when a lucrative part-time job is needed. The young college girl Kylie (Ali Cobrin) seems to have found in the so-called Girlhouse. In the secluded mansion she can live, gets food and a decent income. All she has to do in return is be filmed at every turn - and with as little or no clothing as possible. Actually, Kylie has no problem posing for strangers on the internet if it means she can finance her studies. What she doesn't know is that the mysterious user LoverBoy (Slaine) is taking a special interest in her. And since a traumatic experience in his childhood, he doesn't take well to being made fun of. But when that's exactly what happens, LoverBoy leaves the virtual world and becomes a deadly real danger to Kylie and her colleagues...

Girlhouse has all the ingredients of a classic slasher. For example, in the best Halloween fashion, the opening sequence sees the birth of the killer who will later wear a mask while murdering. There is a strong heroine, some naked skin and of course several murders. They don't turn out quite as bloody as you're used to from other representatives of the genre, but they are staged quite effectively. Even though movies like Girlhouse are a dime a dozen, this movie stands out from the crowd in some aspects. This doesn't make it a classic like the movies that are clearly quoted here. But an entertaining and in every respect worth seeing representative of the slasher film director Trevor Matthews has succeeded with his directorial debut all the time.

This starts with the choice of actors. Ali Cobrin doesn't deliver an Oscar-worthy performance, to be sure, and her good looks certainly didn't play a minor role in the casting. Nevertheless, her acting doesn't seem as wooden as it is often the case in this genre. Adam DiMarco, who plays Kylie's crush Ben, also seems very charming and pleasantly natural. You'd love to see the two of them survive the events and then find happiness together. And then finally, there's Slaine, who plays the killer (who, however, looks nothing like he does on the cover of the disc!!). His loverboy is a thoroughly menacing killer, even if you definitely feel sorry for him, especially in the first few minutes of the film.

The rest of the residents of the titular girlhouse, on the other hand, get rather few opportunities to show off their acting talents and have to limit themselves to keeping their bodies slightly covered, if at all, to the camera. Especially the male viewers will probably complain less about that, but compared to the main actors there is a clear difference in quality when it comes to talent. But even that doesn't really have a negative effect on the film - and that's not because of the textile poverty prevailing in the house. No, it's rather a slight ironic undertone throughout that transforms the young women's acting from unintentionally funny to amusing. In addition, the film generally benefits from the fact that it doesn't take itself too seriously and primarily wants to achieve one thing: to give its target audience what they expect.

And even if, as already mentioned, the slasher scenes are comparatively decent and many a genre fan might have expected even more naked skin, Girlhouse delivers fully overall. The film is entertaining, amusing, but also exciting and craftsmanship absolutely solid. No masterpiece that reinvents the genre, but an all-around successful representative of the subject, which is never boring despite many familiar set pieces. And for this there is a very clear: Absolutely worth seeing!

Picture + Sound: The image of the DVD pleases with a decent overall sharpness and a very atmospheric color scheme. Moreover, since the black levels and contrasts are well matched, the gloomy mood of the images can fully unfold, especially in the second half of the film. The Dolby Digital 5.1 mix is primarily dominated by the dialogue and is overall rather unspectacular. In some scenes, however, purposefully used surround effects provide not only a little dynamic in the multichannel sound, but also a comforting goosebumps for the viewer. Good!

Extras: More than the trailer and other program tips from the provider, the Blu-ray unfortunately has nothing to offer.

Conclusion:Girlhouse is, in itself, a standard slasher of the sort that existed en masse in the 80s and 90s. But a slightly self-deprecating undertone, the very good craftsmanship and the surprisingly good acting of the main actors make the film an extremely pleasant surprise for all genre fans. The DVD presents the flick in atmospheric picture and sound quality. Only in terms of bonus material the disc disappoints. All in all, however, the film is enough to give the DVD a clear recommend