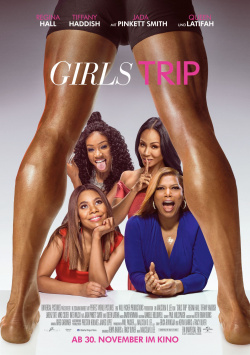 Once upon a time, Ryan (Regina Hall), Sasha (Queen Latifah), Lisa (Jada Pinkett Smith) and Dina (Tiffany Haddish) were best friends. Wherever the Flossy Posse went, fun and parties were the order of the day. But then career successes, starting families, and normal life got in the way of this girl friendship. It's been years since the women have seen each other, but that's about to change. For the big Essence Festival in New Orleans, the clique is finally to be reunited. And at first, everything seems to be exactly as it once was. The four friends have a lot of fun and turn the city upside down. But suppressed conflicts and secrets ensure that the party could quickly be over and the final end of the Flossy Posse is sealed.

With Girls Trip, director Malcolm D. Lee has hit a real bull's eye in the US. His female-afro-American Hangover variant has grossed a more than respectable $115 million at a manageable cost of under $20 million. Why, however, is only partially understandable. Granted, there are a few scenes that you can definitely smile about. But on the whole, the comedy is just vulgar, loud and extremely flat. That every conversation seems to revolve around sex or the genital area is something you already know from other comedies. Without it seems - and not only in Hollywood - it just does not go at the moment.

At least the actresses, among them the Oscar nominated Queen Latifah, seem to have had fun with this feuilleton nightmare. That doesn't make the film any better, but their acting at least makes some scenes more bearable. Yes, it's kind of sad that the standard in mainstream comedies keeps getting lowered, that the same winning formula is played over and over again without a shred of originality in it. But, and this has to be said, as long as there is an audience for these kinds of comedies, they will continue to be made. And as long as people have fun with this kind of gags, so long also machinations like Girls Trip have their right to exist in a certain way.

For whom Bad Moms is still way too harmless and who can laugh at penis and pee jokes over and over again, Girls Trip can also be recommended. But if you expect a touch of level besides real humor in your comedies, you should clearly leave this movie alone.