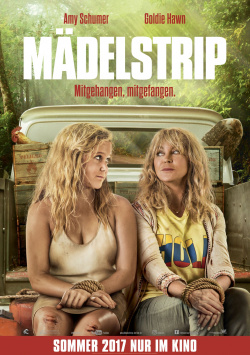 Fired from job and dumped by boyfriend - can life get any worse for Emily (Amy Schumer)? It can! Because the trip to South America she actually booked for herself and her ex as a love vacation can't be canceled. And the only one who can be persuaded to go along is, of all people, Emily's over-anxious mother Linda (Goldie Hawn), who is mainly prejudiced about the trip to the supposed paradise. These are quickly confirmed, however, when the mother-daughter team is kidnapped by the henchmen of the nasty Morgado (Oscar Jaenada). But the question soon arises as to who this is worse for - the kidnapped or perhaps the kidnappers?

For Girls' Trip, director Jonathan Levine (Warm Bodies, The Magi) has persuaded Oscar winner Goldie Hawn to return to the big screen after fifteen years out of her cinema retirement. Alongside Amy Schumer, arguably the most successful US comedian at the moment, the 71-year-old Hawn plays the neurotic mother of a no less neurotic loser. Together they put their foot in their mouths, only to drive their captors out of their minds - and sometimes out of their lives. Despite this witty premise, the film flopped with critics and was largely negatively reviewed by U.S. audiences as well.

No question, the comedy features a lot of very flat gags whose extraneous shame factor is shockingly high. And yes, one would have liked to see a slightly more dignified comeback for Goldie Hawn. Still, chick flick is nowhere near as bad as its reputation. Because when it does work, it works really well. So besides the moments where you roll your eyes in annoyance, there are also some really good laughs. I'd even go so far as to say that a scene with the perfect interplay of what's being said and the physical comedy of the moment is one of the funniest things seen so far this year.

That, of course, makes it all the sadder that the whole movie doesn't have that level of gag to offer. Too often here is reached into the flat Zoten box, which really would not have been necessary to generate laughs. Because a lot of little moments make it clear that the movie works whenever it's either about classic slapstick, or witty dialogues with some backhanded humor. But then it immediately goes below the belt again, and already your eyes are rolling again.

In this respect, Girls' Strip is not a grotty film, but it is a very frustrating one. Both Levine and his two leading ladies can simply do better. It's a pity that in the end there's so little left of the potential that the story, the director and the actresses bring along. Still, the bottom line is that it's still funny and entertaining enough to merit a Worth Seeing rating, albeit with some sacrifices.