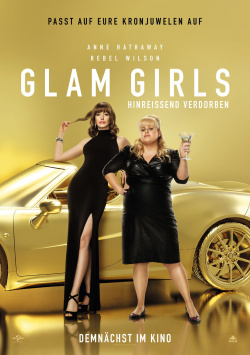 Josephine (Anne Hathaway) has built a luxurious life as a con artist in a small town in the south of France. This is her stomping ground, where she expertly fleeces rich men. But then suddenly the Australian Penny (Rebel Wilson) shows up to poach loudly in Josephine's territory. Of course, she can't let that happen. But when the plan to lure Penny out of town goes awry, Josephine agrees to take the clumsy oaf under her wing. In fact, Penny seems to learn quickly and soon she's allowed to pounce on her first victim: young self-made millionaire Thomas (Alex Sharp). But like everything else in the lives of these two con artists, nothing is quite what it seems.

Glam Girls - Rapturously Depraved is loosely based on the 1988 comedy Two Rapturously Depraved Villains starring Steve Martin and Michael Caine, which in turn was a remake of the 1964 film Two Successful Seducers. In fact, this new, female version of the story has one thing in common with the wonderful eighties version: you can tell that the lead actresses, but especially Anne Hathaway, had great fun playing the adorably depraved con artists. And this obvious joy in playing then also makes for some pretty good laughs.

But in the end they unfortunately don't outweigh the many weaknesses. This is mainly due to two things: The script and Rebel Wilson. The script relies too much on flat jokes and loses sight of the story and its characters completely. The whole thing is also staged in such an uninspired way that any hint of good humor is nipped in the bud. And then there's Rebel Wilson. Yes, she was funny in Pitch Perfect. And yes, her very own style works well at times when she throttles it a bit - such as in the amusing Netflix comedy Isn`t it Romantic. But unfortunately, it becomes clear here that Wilson has no ability to change at all. She just does the same thing over and over again, varying only the level of crudeness.

This just isn`t funny anymore in the long run, and only makes for extreme strangeness. If you've ever seen Wilson in interviews, you can guess that she's definitely got more going for her than playing the chavvy klutz with a heightened sex drive. But there is hardly anything of that in her films and especially here. There may be some Fat Amy fans who don't mind seeing the same role over and over again. But if you were hoping for a comedy that has more to offer than below-the-belt jokes and the usual slapstick interludes, you'll be bitterly disappointed. Therefore: Only conditionally worth seeing!