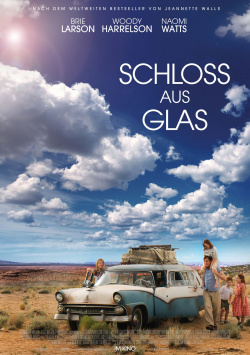 Jeanette (Brie Larson) has a good life: she has money, a nice apartment in New York, and a successful fiancé (Max Greenfield) who sweeps her off her feet. But it wasn't always this way. During her childhood and adolescence, Jeanette and her siblings had to move repeatedly and they lived in constant poverty. Their father Rex (Woody Harrelson) wanted to give his children, but especially Jeanette, a life full of adventure. However, his alcoholism and angry outbursts make the situation increasingly difficult for the children. Their mother (Naomi Watts), a headstrong artist, is also unable to provide stable family conditions. But Jeanette has long since come to terms with all this. At least until she meets her parents again in New York, where they live in a run-down building. Now the young woman is forced to confront her past again - with unexpected consequences for her new life.

Castle of Glass is the film adaptation of Jeanette Wallis' bestselling autobiographical novel of the same name. Director Destin Daniel Cretton has created a moving family drama from the original with some very haunting scenes. However, these are not enough to justify more than two hours of running time. There are too many moments where the events merely seem to repeat themselves. The viewer has long understood what the film is getting at, which then makes such scenes completely unnecessary and only leads to annoying lengths. This is where the scissors could have been applied a bit more often.

Acting-wise, the whole thing is beyond reproach. Woody Harrelson and Brie Larson in particular are really great. But even they can only partially cover up the weaknesses of the production. And then there's the core message of the story, which is perfectly acceptable to take offense at: Rex and Rose are not good parents. When Rose neglects her daughter to such an extent that she gets badly burned, or Rex squanders the money he's supposed to be spending on buying his kids something to eat, you can understand all too well why the kids want to escape to their own lives as soon as possible. However, the fact that all is forgiven in the end and wasn't so bad after all, because Rex taught his kids self-reliance the hard way and made their lives a great adventure, is a bit of a questionable message after all. It also makes the ending not only too conventional, but also too predictable.

That doesn't change the fact that Castle of Glass offers some very intense moments that go to your heart as a viewer, that stir you up or move you to tears. These strong moments combined with the good actors and a very nice camerawork make the book adaptation, despite clear weaknesses, an entertaining, rousing drama, which perhaps could have been told a little tighter and which a slightly less conciliatory ending would have definitely done good. And - this also needs to be mentioned here - a better edited trailer would have been good as well, because the whole movie is actually told in that clip. So if you've seen the trailer, you shouldn't expect any surprises! All in all, though, if you like touching family stories, you'll definitely be well served here. Worth seeing

Cinema trailer for the movie "Castle of Glass (USA 2017)"
Loading the player ...