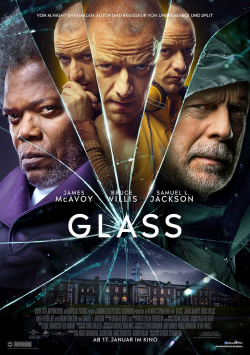 18 years ago, David Dunn (Bruce Willis) learned that he had special powers after a train accident that he was the only one to survive. Not only is he enormously strong and seemingly invulnerable. Through touch, he can also see into the deepest recesses of the human soul and has brought down many a bad guy. Although the police have long been on the trail of the mysterious avenger, David has so far been able to remain unrecognized. But when he sets out to hunt Kevin (James McAvoy), a killer with multiple personalities, they are both captured by the mysterious Dr. Ellie Staple (Sarah Paulson). She has also imprisoned David's nemesis, Mr. Glass (Samuel L. Jackson). Now she's out to prove that all three men are imagining their special powers. But she hasn't counted on the fact that by doing so, she'll enable one of them to put a long-prepared plan into action.

Glass is a rather unusual project for the industry. That's because the film is equally the sequel to M. Night Shyamalan's 2000 box office hit Unbreakable, as it is to his 2016 surprise hit Split. What's unusual about this is that both films were produced by different studios, and now the two rivals have teamed up to direct this installment that connects the two predecessors. With Unbreakable being one of the director's best films and Split marking an acclaimed comeback after a couple of pipe-falls, expectations for Glass are naturally correspondingly high.

And unfortunately, it has to be said that Shyamalan fails to live up to those high expectations. That's not to say that Glass is a bad film, though. It just hasn't become the work that fans of the prequels have been waiting for. That said, the filmmaker does try to make the connection to Unbreakable in particular, including using unused footage from the work and infusing it with new elements. It's also nice to see Bruce Willis convincingly slip back into this role, even if he ends up being a little too overshadowed by James McAvoy and Samuel L. Jackson.

The biggest problem with the film is the story. This is too bloated with long conversations about comic books, which seem rather unnecessary, especially in these days of countless Marvel and DC adaptations. In 2000, this may have worked, as only a small fan base was familiar with the rules of superhero comics at the time. But that has changed significantly nearly two decades later, something this script should have taken into account as well to avoid seeming oddly antiquated.

You have to be able to engage with what Shyamalan serves up here to enjoy the film's many strengths. Those who fail to do so will be disappointed or perhaps even annoyed by Glass. On the other hand, those who can take the film for what it is will be well entertained visually, in terms of acting and, in the end, dramaturgically. As such, this is certainly not one of the best films from the filmmaker once hailed as Hollywood's new wunderkind, but it's also not one of those pickles that mercilessly destroyed that reputation. Rather, the mystery-fantasy thriller balances somewhere in between. It's disappointing at first, but in the end it's thoroughly engaging, entertaining and well worth seeing!