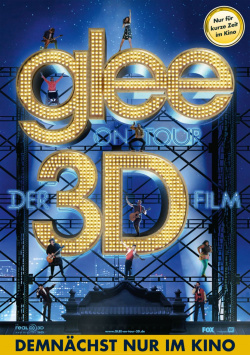 GLEE on Tour - The 3D Movie

The TV series Glee is a real phenomenon. The cast have become stars virtually overnight, and the songs from the musical comedy dominate the US charts to such an extent that The Cast of Glee is now more successful there than The Beatles. A live tour between two TV seasons was also a resounding success, so it was only a logical consequence to want to continue this success story in the cinema. But with the 3D concert film, the math didn't quite add up.

Shot over two days in New Jersey, Glee on Tour - The 3D Movie presents the young stars of the series performing their versions of hits such as Katy Perry's Teenage Dream, I'm a Slave 4U by Britney Spears, the Safety Dance by Man without Hats or the Journey hit Don't stop believin', one of the show's very big anthems, in front of enthusiastic fans. The actors, whether Lea Michele (Rachel), Cory Monteith (Finn), Heather Morris (Britney), Chris Colfer (Kurt), Darren Criss (Blaine), Kevin McHale (Artie) or Amber Riley (Mercedes) do their job very well and can convince both vocally and dance. The atmosphere among the enthusiastic Gleeks, as loyal Glee fans also call themselves, is great and can definitely be transferred to the audience. So far, then, the film is for all fans who have not had the pleasure of such a live concert, a really successful and worth seeing addition to the series.

But unfortunately the film does not only consist of concert sequences. Director Kevin Tancharoen (Fame) pumps the whole thing up with completely unnecessary filler. The look behind the scenes could be quite nice, if there would be something like authenticity. But since the actors stay in their characters and try to improvise funny moods, the whole thing seems a bit cramped and not really amusing. Worse, though, are the segments about Glee fans who have learned through the show that you can be happy and make lots of friends even if you're an outsider. For example, there's a girl who suffers from Aspergers Syndrome but has made many new friends thanks to her favorite show. Or a diminutive student who is not only accepted as a cheerleader at her high school, but is also voted prom queen at prom. Not only do these films fail to deliver on the promise of a 3D concert experience, but these films have such a cramped political corectness that is so not at all befitting of the series' occasionally quite biting wit.

Here it becomes clear that the creators seem to have completely overlooked what makes Glee so special. It's just not just the music and not just the message of more tolerance. The humour and also the older characters, which are completely missing in the film, contribute considerably to the success of the series. Glee without Sue Sylvester or Will Schuester would certainly still be quite entertaining, but certainly wouldn't have become the cult in the long run that the show is after only two seasons.

Glee on Tour - The 3D Movie can be convincing when there is singing and dancing on stage in good 3D visuals. But as soon as the action goes backstage or drifts into the lives of the fans, the film in no way lives up to the entertainment value of the series. And so it's really no wonder that this very quickly and somewhat lovelessly produced concert film flopped mercilessly in the USA. Whether this will be different in Germany is questionable - especially since Glee is not as popular here as it is in the States. Therefore: Recommended only for very loyal Gleeks, who are primarily interested in the music!