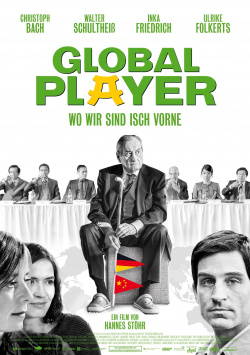 Global Player - Where we are isch in front

Things are not looking good for the family-owned company Bogenschütz & Söhne from the Swabian town of Hechingen. Although the company has been known for decades for its reliable and once very innovative textile machines, over the years many former customers have switched to cheaper competition from Asia. With all his might, company manager Michael Bogenschütz (Christoph Bach) has tried to avert imminent bankruptcy and keep the bad financial situation a secret from his father, senior boss Paul Bogenschütz (Walter Schultheiß), and from his sisters Marlies (Inka Friedrich) and Marianne (Ulrike Folkerts). But when he tries to negotiate the sale of the company with a delegation from China, Paul gets wind of it and immediately exercises his right of veto. He is convinced that if all the children contribute their financial share, the company can still be saved. After all, quality will always prevail. But Michael knows that time has long since run out for the family business. And while he desperately tries to secure one last important major order and get the Chinese to use their money to save the jobs in Hechingen, Paul embarks on a trip through Germany with his Polish housekeeper Agnieschka (Monika Anna Wojytllo) to convince his children of his rescue plan. Because he won't and can't give up his life's work that easily.

With Global Player, director Hannes Stöhr strikes a completely different tone after his cult film Berlin Calling. His tragicomedy about the consequences of globalisation for a Swabian family business is full of local colour, but at the same time tells a very global story in keeping with the title. The conflict between the generation of the 90-year-old patriarch, who relies on continuity and tradition, and the younger generation, which has grown up in a world marked by constant change, is what makes the story so appealing, even far beyond the borders of Swabia. But also the clash of different cultures, which is unavoidable due to globalization, makes for some very amusing and well-observed moments.

The film is carried by a convincing ensemble of actors, among whom especially Walter Schultheiß as the aging head of the family, Christoph Bach as the managing director of the family business suffering under the enormous burden of his responsibility and Monika Anna Wojtyllo as the resolute housekeeper from Poland can leave a lasting impression. Visually, the film is given a very special touch by the contrasts between metropolises such as Shanghai or Berlin and the Swabian idyll.

In addition to the many positive aspects, however, there is also one clear point of criticism that noticeably diminishes the viewing pleasure. As hard as Stoehr has tried to make sure that humor and drama are roughly balanced, the mix just doesn't quite want to work here. The humor, aside from some wonderfully biting moments, is rather subtle and doesn't provide the big laughs. The more dramatic moments, on the other hand, such as Paul's recollections of his time in the war, are at times so bleak that they almost seem a little out of place and drag the viewer's mood down considerably. There's nothing at all wrong with the craftsmanship of these scenes, but the discrepancy with the more light-hearted moments is too great to make for a coherent overall picture in the end.

So in the end, Global Player is a very ambitious tragicomedy with some standout moments, but their impact is diminished by the somewhat discordant tone of the story. Still: well worth watching as an entertaining family portrait with depth for lovers of German arthouse productions and fans of rather laconic humor!

Cinema trailer for the movie "Global Player - Where we are isch in front (Deutschland 2013)"
Loading the player ...