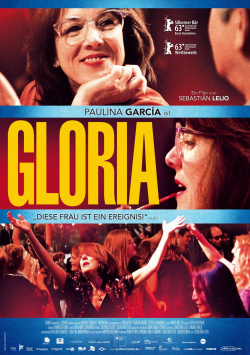 If she believed the women's magazines or television, Gloria (Paulina Garc&iacute;a) would already have her best years behind her. She is 58 years old, divorced and her children are already out of the house. But Gloria does not see at all to be pushed already on the siding. She still wants to experience something and enjoy the pleasures of love and life. And so Gloria keeps going to singles parties, where she meets Rodolfo (Sergio Hern&aacute;ndez), seven years her senior. Quickly a passionate affair develops between the two, in which Gloria believes to have found the very big luck. But instead of the 7th heaven Rodolfo takes her on an emotional roller coaster ride, which threatens to bring her to her knees. But Gloria doesn't let him take her joy of life that easily.

With Gloria, director Sebasti&aacute;n Lelio wanted to stage a film about his mother's generation and set a small monument to all Chilean women who defy the difficulties of life with a lot of positive energy and strong will. And so he has placed a very normal woman at the centre of his story. A woman who doesn't have much influence on those around her, who rather observes how important things happen in the lives of the people around her. Gloria is, in herself, a woman who in other films would have held only the function of a supporting character. Telling the story from her perspective was what made the film so appealing to Lelio.

Because Gloria is present at every moment of the film, he needed a very strong actress who could carry the story with her charisma alone. With Paulina Garcia he seems to have hit the bull's eye, the charismatic leading actress inspired the audience not only at the Berlinale so much that there was a Silver Bear for Garcia. No question: for the audience the film wants to address, Paulina Garcia is a revelation, as she manages to win the hearts of the audience very quickly with a lot of charm and nuanced acting.

Whoever is infected by Gloria's joie de vivre, is guaranteed to be infected by her struggle against everyday defeats and her nevertheless unbroken optimism. In this case, Gloria is also a very successful and watchable feel-good movie. For those who don't succeed, however, the action will quickly seem trivial and Gloria's incessant singing slightly annoying. Because on the surface the story plods along ponderously from one scene to the next. Involving looks somehow different. But sometimes the big and important things in life are hidden in apparent trivialities. And this is what the film shows very nicely in its unagitated way.

So if you have a soft spot for program cinema fare aimed at the 50+ generation, if you don't need a particularly exciting story to be well entertained and if you love strong female characters, Gloria will certainly be able to charm you. Worth Seeing

Cinema trailer for the movie "Gloria (Spanien/Chile 2012)"
Loading the player ...