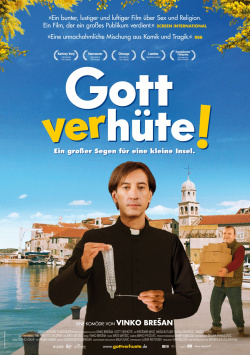 Young priest Fabian (Kre&scaron;imir Mikic) has a tough task ahead of him when he is asked to take over the small parish on a small Dalmatian island. For not only can he not even begin to hold a candle to his predecessor in terms of popularity. In addition, his parish is shrinking steadily, as there are more and more deaths, but no births. And Fabian absolutely has to change that. The reason for the disastrous birth rate is quickly found when kiosk owner Petar (Nik&scaron;a Butijer) confesses to Fabian that his biggest revenue comes from selling condoms. This gives Fabian an idea: together with Petar and the quirky pharmacist Marin (Dražen Kühn), the clergyman makes sure that from now on there are only holey condoms and vitamins on the island instead of the birth control pill. The manipulation of the contraceptives soon shows the desired success: the birth rate on the island increases rapidly and the baby boom even ensures that numerous couples from all over the world come to the island. So Fabian's plan really seems to have worked - but are all the pregnancies really a blessing?

With God forbid!, Zagreb-born filmmaker Vinko Bre&scaron;an has directed a chirpy Balkan comedy that has some wonderfully funny moments to offer, especially in the first half. Bre&scaron;an gets off to a wonderfully light-hearted and surprisingly irreverent start to the original story, which he spices up with some raunchy gags and a dash of black humour to create an enjoyable whole. He takes the audience to a small island full of quirky characters, but they exude tremendous charm, making it a place you'll want to linger for 90 relaxing minutes. In this part of the film, the director also manages very well to wrap up some serious issues in a humorous way, making you laugh and think at the same time.

The actors are convincing and especially Kre&scaron;imir Mikic does a really good job as the desperate priest. And so the impression solidifies more and more that one sees here a really successful, smart and also a little wicked arthouse comedy, which is just really fun. But then Vinko Bre&scaron;an quite abruptly changes the tone of his production and the humorous light-footedness is replaced by gloomy bitterness. What follows is anything but funny, even if the production does make an effort here and there to lighten things up with a little humor. But considering the things that happen especially in the last third, the humor seems rather inappropriate and almost a little cynical.

So in the end a very unbalanced overall picture emerges, whose two halves just don't want to fit together. It's not a big deal if there are some dramatic moments in a comedy. But to pull the viewer down emotionally after an extremely relaxed beginning and then trying to build up a certain lightness again just doesn't work. And that's a pity, because the story is really wonderful at its core and its realization is extremely successful in many parts. But if you really want to enjoy the movie, you should definitely prepare yourself in advance for the rather drastic change of mood. Because only then the somewhat pale aftertaste will be kept in check and the positive overall impression will prevail. And then there is also overall the worth seeing, which God forbid! at least in the first half fully deserves!