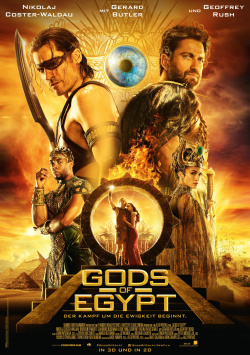 Once upon a time, the world of men and the world of gods coexisted when the merciless Set (Gerard Butler), god of darkness, took power over the land. Young thief Bek (Brenton Thwaites) is forced to take on this all-powerful god when the love of his life, Zaya (Courtney Eaton), dies. In order to bring her back to life, Bek must somehow find his way to the afterlife. But to do so, he needs the help of Horus (Nikolaj Coster-Waldau), the god of heaven who has been living in exile since Set's violent takeover. After Bek was able to retrieve one of his magical eyes, Horus agrees to help Bek bring the love of his life back to life. At the same time, he wants to take revenge on Set and end his reign of terror. But this sets off a merciless battle that will demand great sacrifices from both Bek and Horus.

With Gods of Egypt, director Alex Proyas ventures into the waters of films like Clash of the Titans. Actually, it could be assumed that Proyas is just the man for such an endeavor. After all, with films like The Crow and Dark City, he has proven that he can direct sophisticated fantasy cinema with plenty of atmosphere. And even more conventional genre cinema like I, Robot, Proyas has mastered very watchable. But with a script by the writers of Dracula Untold or The Last Witch Hunter, extremely wooden acting, and occasionally surprisingly poor effects, even an inherently talented director like Proyas can deliver very little that is positive.

The story, while not particularly original, does offer potential for a great fantasy adventure. Unfortunately, though, the dialogue is runaway bad and the characters are drawn so one-dimensionally that nearly all of the story's successful elements are buried by it. This script is the best proof that the producers in Hollywood really don't read scripts anymore. Because there is no other way to explain that such a poor script was awarded a budget of almost 150 million dollars. Even more frightening, however, is the fact that you relatively rarely see the film's high budget. Often the whole thing seems like a B-movie with simple videogame effects. Big blockbuster cinema, on the other hand, looks different.

The actors also disappoint across the board. Nikolaj Coster-Waldau (Game of Thrones), who showed in the drama Second Chance, for example, what a good actor he is, is trying hard as a divine action hero, but remains just as pale, as Gerard Butler. Brenton Thwaites delivers a completely colourless performance and his partner Courtney Eaton is reduced to stumbling through the scenery with wide eyes and lush cleavage&eacute;. And even Elodie Yung, who was just convincing as Elektra in the second season of the Netflix series Daredevil, sells herself completely short here. Really disappointing, however, is Oscar winner Geoffrey Rush. It's almost a feat to get such a weak, unintentionally hilarious performance out of this great actor. Alex Projas has done it! Congratulations!

If you liked movies like Pompeii and don't have a problem with flat characters, average effects and bad dialogue, you'll still be able to discover enough action and spectacle here to make a trip to the cinema (especially the 3D version) worthwhile. But for those who need more for good cinema entertainment than a few attractive people and a lot of fantasy action, a visit to Gods of Egypt will be many things, but not a pleasure. And that's why there's only one here: With very clear cutbacks conditionally worth seeing!