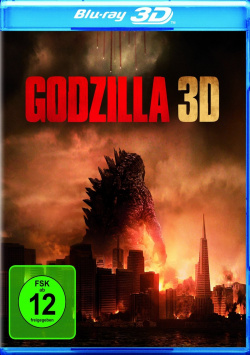 Film: One of the most famous monsters in movie history is back! In 28 Japanese films Godzilla has provided so far for fear and terror. In 1998, Roland Emmerich had already tried to make the Japanese cult monster internationally presentable. Although his film was commercially successful, it was a complete failure with critics and especially with Godzilla fans. Now Gareth Edwards is making a second attempt at a worldwide Godzilla blockbuster. And though his film will run counter to some viewers' expectations, his attempt is more than successful.

In an accident at a Japanese nuclear power plant, physicist Joe Brody (Bryan Cranston) loses his wife (Juliette Binoche). While the authorities declare the accident a natural disaster, Joe is convinced that something else is behind it altogether, something the government is determined to keep hidden at all costs. In the following fourteen years Joe tries obsessively to bring the truth to light. But not even his son Ford (Aaron Taylor-Johnson) wants to believe him. He has started a family of his own with his wife Elle (Elizabeth Olsen) and wants to put the past behind him once and for all. But then it turns out that Joe was right all along. On the supposedly radioactive site of the power plant destroyed years ago, a monster comes to life against which even the strongest weapons of man seem to be powerless. But there is something that could kill this creature. Something great and powerful that has long slumbered unnoticed in the depths of the sea - Godzilla!

Gareth Edwards, with his feature debut Monsters, has created what is probably the most unusual monster-alien film in recent years. Because in these days of mega-blockbusters that primarily splurge on expensive special effects, he simply refrained from showing the titular monsters for long stretches. Actually only in the final sequence viewers got to see the giant creatures from another world. If you are hoping that Edwards will make up in Godzilla for everything he didn't show in Monsters, maybe because of budget reasons, you will be disappointed. Because despite some really spectacular scenes, this movie is no special effects overkill either. Godzilla is only seen for a few minutes and most of that time he is largely obscured by dust. Now that may sound rather off-putting. But even though a bit more Godzilla in a movie bearing his name would have been nice, it must also be admitted that just by barely seeing him, the scenes in which he appears in full size are extremely effective.

Muto, the other monster of the movie, is seen much more often in full beauty, but even until his first appearance it takes over 45 minutes. So if you're expecting a pure monster movie, you'll be bitterly disappointed for long stretches. Because just like in Monsters, the humans are in the center of the action in Godzilla. The family story Edwards tells isn't exactly original and also has some very worn out clichés to offer. But apart from a few little hangs, he succeeded in making a dramaturgically exciting film, in which emotional moments are just as important as big effect scenes. Even if Bryan Cranston, Aaron Taylor-Johnson or Ken Watanabe do not deliver Oscar-worthy performances, their acting is truly pure gold compared to other genre works and especially to Emmerich's Godzilla.

In the last third, the action really gets going. Here, Oscar-winning effects specialist Jim Rygiel (Lord of the Rings trilogy) and his team have done a truly outstanding job. Because even though the design of Godzilla is rather traditional, nothing reminds us of the amusing man-in-a-rubber-suit look of the old flicks. Supported by a gritty, gripping underlying atmosphere, the monstrous fight sequences are truly a feast for the eyes, and one sequence in particular, where Godzilla gets to use a very special skill, truly leaves a lasting impression.

Gareth Edwards proves with his second monster movie that great event cinema doesn't necessarily have to be dominated by fast cuts, loud action and a constant bombardment of CGI effects, but that it can also be a bit more subtle and still look quite big. With this he may not have met the taste of the masses. But it's a fact that he directed a visually extremely thrilling and dramaturgically captivating flick, which not only entertains well, but also makes you want to see more Godzilla. And for this there is a very clear: Absolutely worth seeing!

2D: The action often takes place in the dark. This may be at the expense of contrast, but the overall image sharpness is still at a very high level. Even small details come into their own very well. The color scheme looks very cohesive, with earthy, dirty hues dominating the picture.

3D: The image of the 3D version also still has a pleasant image depth. The 3D effects are neatly implemented, but only come into their own to a limited extent in the very dark scenes. In brighter moments, on the other hand, there is truly nothing wrong with the 3D mix. Especially in the last third there are some really good 3D effects to see, which can definitely increase the enjoyment of the film.

The sound on both versions is simply terrific. This is primarily due to the film's excellent sound design, which comes across very well in the dynamic DTS-HD Master Audio 7.1 mix, even in the home theater. The mix creates a very atmospheric sound carpet, through which the viewer is drawn right into the action. The voices are mixed well understandable and do not get lost in the din, which Godzilla and Co. cause, even in the more action-packed sequences. For this there is a clear: Very good!

Extras: The bonus material is divided into two categories. The first is called MONARCH: Unlocked Secret Files. Here there are three nicely done fake videos to watch, which give a deeper insight into the secret background of the story. In these, viewers can take a look at Operation: Lucky Dragon (approx. 2:44 min.) or the M.U.T.O.. File (approx. 4:29 min.) open. Finally, The Godzilla Revelation (approx. 7:25 min.) should especially please conspiracy theorists.

The second category is called The Legendary Godzilla and is more concerned with the making of the film. Godzilla: A Force of Nature (approx. 19:18 min.) not only offers a look at the making of the film, but also offers a brief journey through the history of the franchise. A Whole New Level of Destruction (approx. 8:24 min.) shows how the trail of devastation left by Godzilla and Muto came to be. Two other short documentaries then delve into the H.A.L.O.. Jump (approx. 5 min.) and with the M.U.T.O.S. (approx. 6:49 min.). Overall, bonus material well worth watching, but it only scratches the surface and leaves you wanting more.

Conclusion: Godzilla may have disappointed some viewers, as the iconic lizard only makes a relatively brief appearance and the story itself has little to really offer in the way of new content. Nevertheless, overall Gareth Edwards has created a very atmospheric monster movie, which consoles over some dramaturgical weaknesses with great effects, a terrific sound design and some quite great action moments. A film that makes you want to see more Godzilla. The 3D Blu-ray presents the film in very good picture and excellent sound quality. The bonus material is worth seeing, but could definitely be a bit more extensive. Overall, whether in 2D or 3D, this disc is definitely recommended!