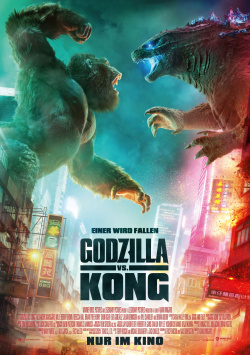 Mankind has a real problem: Godzilla, who was considered a friend and protector of mankind from other titans, is cutting a swath of destruction behind him. No one seems to be safe from him. Only Kong could defeat the king of monsters. To do this, a team led by scientist Nathan Lind (Alexander Skarsgård) wants to find the home of the Titans inside the Earth with Kong's help. But already on the way there Godzilla and Kong meet and the fight of the most powerful Titans begins. Lind and his team have little time to figure out why Godzilla has suddenly turned against humans and how to stop him...

At last, some really great popcorn cinema without much point, but with an extremely high fun factor! "Godzilla vs Kong" follows the events of "Godzilla II: King of the Monsters", but steps it up a notch in terms of monster action. Like the earlier films in the franchise, this entry again suffers from the cliched and very shallow elaboration of the plot around the human characters. However, when the Titans take center stage, the duel of the cult monsters really lets it rip. Director Adam Wingard gleefully celebrates the B-movie nature of the story, which he enhances with top-notch special effects.

You get the feeling that Wingard knows full well that his film is rather gritty in terms of plot. But instead of taking himself too seriously anyway, he just bangs on so mightily visually that it's so much fun to watch that you hardly notice the thin dialogue or the pointless dramaturgy in a negative way. Especially whenever Godzilla and Kong fight each other, all weaknesses are completely forgotten. Especially since Wingard avoids a mistake that the previous "Godzilla" films have suffered from: He doesn't have all the fights take place in the dark or pouring rain. Thus, you finally get to really see something here.

Especially in the world inside Earth, this makes for some impressive visuals. Even though the upside-down effects used here aren't exactly new, they look absolutely great, especially on the big screen. And when there's a big antagonist involved in the final act that should make loyal "Godzilla" fans cheer big time, the movie is definitely on to a winner. Yes, this film also has major problems with the human characters. Yes, the story is - to put it nicely - very weak. But the movie ends up being exactly what it wants to be: great popcorn fun that finally makes it all the way in a big theater. For me after "Skull Island" (which I like amazingly) the best movie of this franchise and therefore clearly: absolutely worth seeing!