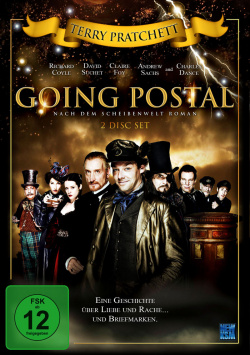 Film: With his "Discworld" novels, author Terry Pratchett has created a cult series that thrills millions of readers around the world. With "Hogfather" and "The Colour of Magic" two of Pratchett's novels have already been successfully filmed for British television. The third adaptation is "Going Postal".

In this bizarre fantasy adventure the trickster Feucht von Lipwig (Richard Coyle) is condemned to work in the post office of Ankh-Morpok as the new post minister. Not an easy task, because since the "clicking" was introduced in Ankh-Morpok, nobody is interested anymore in the conventional mail. For years, letters and parcels have been piled up in the dilapidated building, where both employees merely ensure that they are not beaten to death by the masses. But the clever Lipwig has a plan: he wants to get the mail running again, fill his own pockets with it, and then escape his unloved fate. But not only the rich Klack-Mogul, but also Lipwig's past do not make the implementation of the plan easy. And when the crook also falls in love with a young woman whose family is broken by Lipwig's crooks, the chaos is finally perfect...

An extremely friendly executioner, a golem as a probation officer, a werewolf lady as a policewoman and a post office where letters and parcels have been piled up for years ("We are a little behind schedule"), this is the world of "Going Postal". The wacky fantasy fun doesn't come close to the clever humor of the novel "Ab in die Post" and in some scenes the TV-origin of the movie is all too clearly visible when it comes to equipment and effects. But nevertheless this film has an undeniable entertainment value. Shot in 2009 in Budapest with many Pratchett fans as extras and a small guest appearance of the author himself, "Going Postal" can convince especially thanks to the likeable weird characters and its main actor.

Richard Coyle, who became famous through the British comedy series "Coupling", embodies the lovable crook Feucht by Lipwig with a lot of charm and comedic talent. Supported by many good supporting actors like Charles Dance, David Suchet or Claire Foy, and by some very imaginative ideas Doyle makes "Going Postal" a real pleasure. Whether this applies to the entire runtime of more than 3 hours cannot be judged here, since only the first part could be seen on the press screen. However, this one was quite promising, which suggests the assumption that "Going Postal" is also worth seeing for lovers of somewhat weirder fantasy movies.

Picture + sound: As the final product was not available for testing, no final evaluation of the technical implementation of the film can be given here.

Extras: The bonus material is also missing on the press DVD, which is why a rating must also be omitted in this point. Announced are cut scenes, interviews, outtakes, the trailer and a picture gallery.

Fazit: "Going Postal" is an entertaining, colourful film adaptation of the "Discworld" novel by cult author Terry Pratchett. Although this adaptation doesn't come close to the ingenious wit of the original and gives away a lot of potential, but thanks to numerous nice ideas and a good leading actor, the third Pratchett filming is well worth seeing.