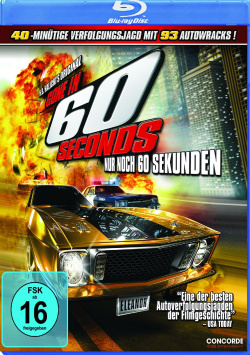 Film: A scant quarter-century before Nicolas Cage and Angelina Jolie roared to the top of the box office charts in 2000 with Just 60 Seconds, H.B. Halicki, as director, producer, writer, lead actor, and stunt driver, made for some mighty junk on the big screen in the original Gone in 60 Seconds. Featuring a nearly 40-minute car chase in which over 90 cars are damaged, the flick became a cult action film that can now be enjoyed in new glory on DVD and Blu-Ray.

Gone in 60 Seconds, which originally hit theaters in Germany as Die Blechpiraten (The Tin Pirates), tells the story of insurance investigator Maindrian Pace (Halicki), who uses his expertise to make a particularly successful living as a car thief on the side. When he receives an order from a South American drug king to steal 48 selected luxury cars in just five days, all the talent of Pace and his team is needed. Despite a few minor hiccups, the thieving spree initially goes fully according to plan and most of the cars, given female code names, are soon ready to be handed over to the client. But when Pace gets his hands on a yellow 1973 Mustang, called Eleanor, he discovers that he has been betrayed to the police. Because they are already ready with a large contingent to arrest the car thief. But they haven't reckoned with Maindrian's driving skills and Eleanor's robust chassis...

Gone in 60 Seconds was virtually directed by H.B. Halicki without the support of a major studio. Many of the supporting roles were filled by friends and family members, with much of the dialogue they had to recite completely improvised. Real police officers, firefighters, and passersby standing around were used as extras. And so it's quite noticeable in the movie that not everyone who was in front of the camera was a real professional. So you shouldn't expect really high quality acting cinema. And the hairstyles and fashion are also testimony to the worst aspects of the 1970s, which doesn't necessarily make the film seem particularly timeless.

Why the action cracker still works really well after all these years, however, is the fact that the car chases are simply staged in a very spectacular and, above all, entertaining way. The film's concluding 40-minute orgy of sheet metal in particular is pure fun cinema, with Halicki demonstrating his talent as a stunt driver to the extreme. This sequence is a pleasant change from the arguably over-stylized action scenes that dominate contemporary blockbuster cinema. If you like movies like Auf dem Highway ist die Hölle los and if you're more concerned with cars than dialogue, this classic can be warmly recommended.

Picture + Sound: The fact that the film is almost forty years on the hump and it was shot at the time with a fairly low budget, is also clearly noticeable on the Blu-Ray despite digital enhancement. While the sound effects on the German soundtrack, such as squealing tires, police sirens and cars crashing into each other, are quite well realized, the dialogue sounds very tinny and muffled. In the English soundtrack, the voices sound a little more harmonious inserted into the action, but they are not really powerful here. If you turn on the German subtitles to help, it is noticeable that the German dubbing has cleverly circumnavigated some politically incorrect statements in some moments, while the translation of the subtitles adheres unadulterated to the original dialogue.

The image has quite a few blurs, slight image noise and also minor dirt. Overall, however, the conversion has turned out quite convincing for a forty year old low budget production, especially in the brighter moments. If you take the age of the film into consideration, you should also be able to overlook the weak points in the audiovisual realization.

Extras: As a bonus, the Blu-Ray has, in addition to the shorter theatrical version (approx. 82 min. in Dolby Mono 1.0) still a very interesting retrospective (approx. 45 min.) to offer, in which not only on the shooting of the action cracker, but also on the life of director/producer/lead actor and stunt driver H.B. Halicki is dealt with. Five quite interesting interviews (approx. 40 min.), as well as two excerpts (approx. 10 min.) from Halicki's films Deadline Auto Theft (Eng.: On the Highway the Police Go Crazy) and The Junkman (Eng.: Firebird Tornado) as well as the trailer for the film and other program tips round out the good supplemental offerings.

Conclusion: Gone in 60 Seconds may not be the most sophisticated, intelligent, and high-quality directed action film of the 1970s. But as a pure fun movie it still works really well after forty years because of the legendary car chase. The fact that here was worked with very original means and a lot of passion, the template for the Nicolas Cage hit Only 60 Seconds is very positive. So if you like classic brass orgies and attach little importance to great acting cinema with sophisticated dramaturgy, you simply can not pass this work. The Blu-Ray pleases especially by the very worth seeing bonus material, the technical realization, however, can hide the age of the production unfortunately only in a few moments really. Recommendable