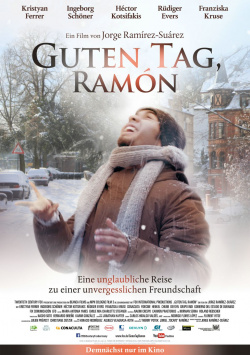 After all his attempts to immigrate illegally to the US have failed, young Mexican Ram&oacute;n (Kristyan Ferrer) decides to try his luck in Germany. With the help of a friend's aunt, who has supposedly found the prosperity he hoped for in Wiesbaden, Ram&oacute;n also wants to earn much-needed money for his family. But no sooner has he arrived in Germany than his illusions are abruptly shattered. Because said aunt does not seem to live in Wiesbaden anymore. With no money and no language skills, Ram&oacute;n must struggle on the streets through the cold German winter. But just when he is about to give up, he meets the pensioner Ruth (Ingeborg Schöner), who, against all language barriers and prejudices, first gives him a few euros and then a roof over his head. It is the beginning of an unusual friendship, through which not only the life of Ram&oacute;n, but also that of Ruth and the other tenants in her house is permanently changed.

German-based director Jorge Ram&iacute;rez-Su&aacute;rez tackles a very topical subject in his fifth feature film, Good Day, Ram&oacute;n, which he approaches in a pleasingly restrained way. His story about immigration, overcoming prejudice and the clash of completely different cultures largely refrains from moralistic finger-pointing and also avoids for long stretches the consternation mode that is not unusual for such films. Instead, Ram&iacute;rez-Su&aacute;rez rather tries to present light feel-good cinema with a positive message. True, this is not free of clichés and very template-like characters. But the charm of the two leads, Kristyan Ferrer and Ingeborg Schöner, helps make these clichés absolutely bearable.

The film's biggest problem is its final act. If the story still seems relatively authentic through scenes like Ram&oacute;ns arrival at Frankfurt airport or his first encounters with the culture in Wiesbaden, which is foreign to him, the whole thing drifts very clearly into the fairy tale-like towards the end. In principle, that's not too bad, since there's nothing wrong with a nice urban fairy tale. But in contrast to the rather restrained first half of the film, the finale seems too thickly applied, which leads to a somewhat unbalanced overall picture.

That admittedly does little to change the fact that Guten Tag, Ram&oacute;n has become a beautiful film - at least if you see it as a modern fairy tale and do not question everything logically. Of course, reality looks different, of course, some things are idealized here, while others are then presented in a somewhat sweeping manner. As an important or even factual contribution to the current immigration discussion this story works only very limited. But if you just want to see a nice story about humanity, joie de vivre and the belief in the good, you should definitely join the young Mexican on his journey to Hesse. Worth seeing