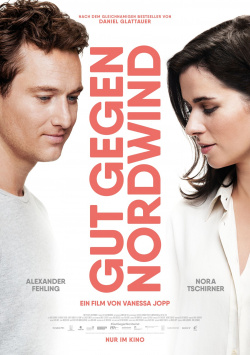 After his girlfriend Marlene (Claudia Eisinger) has left him, Leo Leike (Alexander Fehling) wallows in grief and self-pity. When he accidentally receives an e-mail from Emma Rothner (Nora Tschirner), who actually just wanted to cancel a subscription, Leo starts a refreshingly quick-witted e-mail dialogue with the stranger, which makes him forget his grief. Conversation with the stranger becomes more frequent and increasingly intimate until Leo learns that Emma is married. Although she is very happy with Bernhard (Ulrich Thomsen) and their two stepchildren, she doesn't want to miss Leo's emails anymore. Could it be that the two have fallen in love, even though they have never seen each other? Would such a love even have a future? And will Emma put her marriage on the line for an email romance?

Good Against the North Wind is the film adaptation of Daniel Glattauer's acclaimed novel and the theatrical success based on it. Bringing the modern form of an epistolary novel to the screen in a rousing way is no easy feat. But director Vanessa Jopp, together with her actors Alexander Fehling and Nora Tschirner, has found a way in which it works very well. It's fun to follow the two through their everyday lives as they become more and more close in their emails. And you understand why what develops between them is something really special. Accompanied by an atmospheric soundtrack and immersed in beautiful images of a fictional German metropolis, what emerges here is a wonderful cinematic romance that is a joy to pine over.

However, there are aspects that don't quite work as well. For example, over the course of the two hour running time, minor lengths keep occurring combined with the feeling that the story goes in circles unnecessarily from time to time. A few small cuts and a bit more pacing would have done the romance some good at such points. And then there is the ending, which has been changed only slightly compared to the novel, but still very drastically in order to provide the audience with a clear conclusion, which detracts a tiny bit from the impact of the story.

Good Against North Wind may work a little better as a book and as a play. But the great acting duo alone, whom you wish all the (shared) happiness in the world despite their weaknesses and flaws (or maybe because of them), but also the beautiful soundtrack and the atmospheric imagery make the film an entertaining tearjerker (in the most positive sense of the word), for which there is only one deserved conclusion: Absolutely worth seeing!

Cinema trailer for the movie "Good Against North Wind (Deutschland 2019)"
Loading the player ...