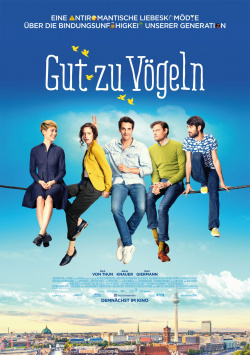 Can it get any worse? First, young society reporter Merlin (Anja Knauer) has been dumped by her actor boyfriend (Kai Wiesinger) - and right before her wedding. And now she has to move into the male flat-share of Jacob (Max von Thun), the best friend of her brother Simon (Max Giermann). The smart bartender, who doesn't really tolerate any woman in his apartment for more than one night, can't handle the tearful aftermath of Merlin's broken heart. He realizes that he won't have any peace until he's given the annoying crybaby an excellent one-night stand. And so he uses all his skills to get Merlin to indulge in some hot lovemaking to forget about her ex. But after Merlin meets only extremely stupid men in Jacob's bar, it comes as it must - and already not only Merlin, but also Jacob is in the middle of a tangible emotional chaos.

There are such movies, where the title alone already suggests bad things. Good to Fuck is definitely such a movie. If you then read through the content, it's actually already clear what you're going to see here: clichés, clichés and more clichés. In a way, this prejudice is confirmed. But fortunately only in a certain way. Because apart from the title and some not exactly highbrow gags, director and co-writer Mira Thiel has delivered a surprisingly funny and endearing comedy here, with a very likeable cast and some very nice ideas.

While Thiel can't do without the now sadly obligatory toilet scene, she does manage to make even one of these look like a bit of a joke. But she manages to lend a certain charm to even such a humorously lowbrow moment. And the climax of the visit to a disco at the Ballermann, which of course shall not be revealed here, is portrayed in such a wonderfully exaggerated way that you just can't help but laugh heartily about it. Sure, some of the gags are really extremely shallow and provide at most a tired smile. But overall, the successful moments are clearly in the majority.

The fact that so many gags work, however, is also due to the good cast. The chemistry between the extremely likeable Anja Knauer and a very charismatic Max von Thun is spot on and helps to console over some weaker moments of the script. But also Max Giermann as an expectant dad who is afraid of now losing the last spark of freedom in his life, Katharina Schlothauer as his heavily pregnant wife Clara and Samy Challah as Jacob's gay roommate are wonderfully cast, as they manage to make their characters defy all clichés and thus make them extremely likeable. It's just fun to watch this motley crew go through their romantic capers. It may not be particularly deep or original. True to the motto It doesn't always have to be the Grimme Award, Gut zu Vögeln offers simple but very good entertainment that never tries to be more than it is. So if you like it a little bit more raunchy and if you are in the mood for an entertaining romantic comedy from Germany, you shouldn't miss this funny movie. Definitely worth seeing

Cinema trailer for the movie "Good to fuck (Deutschland 2015)"
Loading the player ...