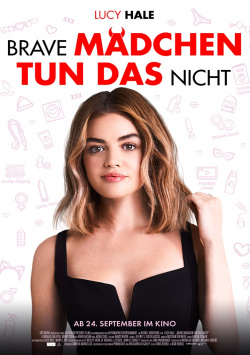 Good Girls Don't Do That

For violinist Lucy (Lucy Hale), life runs in clear, leveled paths. There's only one thing that really throws her for a loop: sex! When she fails to engage in a round of dirty talk with her boyfriend, he'd rather pleasure himself with internet porn than with her. For Lucy, this is a sign that she needs to make a change. First she sends her boyfriend packing, then she creates a sex-to-do list to help her get rid of her uptightness. So she goes on a tour of sex shops and strip clubs with her best friends - but she doesn't learn the really important lessons about love there.

"Brave Girls Don't Do That" is a light US comedy, but it has the same problem as its main character: she'd like to be raunchy, but ends up being totally uptight. Some rather clumsily served gags (a farting horse at a wedding is the pinnacle of creativity here) are supposed to hide that, but they don't really succeed. Now you might think that this would put the film into the category of "Absolute Reinfall". Surprisingly, this is not the case. Yes, it's not really funny, nor is it sexy. But it is at least kind of charming in its own way, which is why it ultimately works quite well as a romantic comedy.

This is partly due to the directing of Chris and Nick Riedell, who, for all their justified criticisms, manage to serve up a very conventional story with a pleasant dose of charm. Also lead actress Lucy Hale, best known from the series "Pretty Little Liars" can counteract the rather weak script with a lot of sympathy points. And even if the encounters between Lucy and her new dream man Grant seem a bit forced dramaturgically, you then put up with it as a viewer, because the chemistry between Hale and her Australian co-star Leonidas Gulaptis is very coherent.

"Brave Girls Don't Do That" is nice entertainment that could be criticized a lot. But it accomplishes what it sets out to do - entertain a rather youthful audience well for 90 minutes - quite handily, despite its flaws. Viewers who would really be bothered by the criticisms are not part of the target audience anyway, and are unlikely to think of buying a movie ticket for the film. But if the trailer appeals to you, you'll get exactly what you're promised with this comedy. This is not quite great cinema, a nice pastime but it is all the same. For that you get a: With cutbacks still worth seeing!