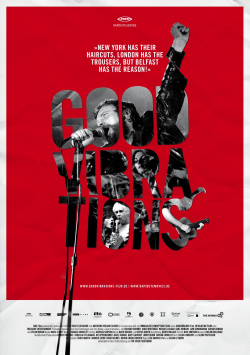 In the 1970s, Belfast is scarred by civil war. Former friends now hate each other's guts just because of their faith. Amidst the conflicts between Protestants and Catholics, Terri Hooley (Richard Dormer) attempts the impossible: he wants to open a record shop in the middle of a contested street row, setting an example against blind fanaticism. But at first, business is more than slow. But then Terri discovers punk and becomes a promoter of young talent. His shop Good Vibrations becomes the meeting point of the Northern Irish underground scene and Terri becomes the great hope of young lateral thinkers and free spirits. But beyond his idealism, he seems to completely forget that he should actually also take care of his family.

Good Vibrations is based on the true story of record store owner, label founder and concert promoter Terri Hooley. However, the film is not really a typical biopic. Rather, Lisa Barros D`Sa and Glenn Leyburn have also staged a tongue-in-cheek declaration of love to punk and to the legendary record store, which also deals with the civil war in Northern Ireland with very biting humor. This may sound a bit inappropriate, since the bloody battles between Catholics and Protestants were really nothing to laugh about. But the directing duo finds a very good way to do so. By using Terri as a mouthpiece with his dry sarcasm, they are able to expose the senselessness of this conflict in a very humorous way.

It doesn't lack the necessary seriousness, though. So Terri is not overstylized to a shining folk hero. After all, his increasingly one-sided positioning obsession and idealism may have made him an idol for young musicians and music fans. But the film also shows how much his wife and children suffered as a result. It is these different levels and the resulting mixture of humorous and dramatic scenes that make this film not only extremely entertaining, but also extremely interesting.

You don't necessarily have to have a soft spot for punk music to be thoroughly entertained by Good Vibrations. Because at its core, the film is a very generic story about the power music can wield and the walls it can break down. It is the charming portrait of a strident maverick who has not been intimidated by general fear, who has gone his way against all odds and who has always stood up again after numerous low blows. Lisa Barros D`Sa and Glenn Leyburn have created a small, offbeat arthouse comedy that may not appeal to broad tastes, but for the target audience it definitely has the makings of a cult film due to the great lead actor, the rousing soundtrack and the biting humor. Worth seeing!