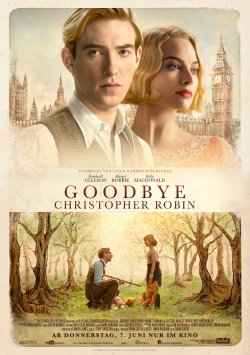 Returning from World War I, acclaimed playwright A. A. Milne (Domhnall Gleeson) longs to escape the noise of the big city and escape the terrible memories of war in the countryside. Against the wishes of his wife Daphne (Margot Robin), the author moves with his family to a small house in East Sussex. But even here the inspiration for new works does not want to come. It is only when Alan spends time with his son Christopher Robin (Will Tilston) that the boy's imagination and stuffed animals inspire him to write a story that becomes an instant classic of children's literature. Pooh the Bear sells millions of copies around the world and makes its protagonist Christopher Robin an overnight star. The little boy is suddenly forced into a role that he did not choose and that will henceforth determine his entire life.

For generations, the adventures of the bearWinnie-the-Poo, his friends Tigger, Piglet or the donkey Eeyore and, of course, the boy Christopher Robin have enchanted children and adults all over the world. With his book, A. A. Milne has brought joy and the ability to dream back to a society scarred by war. A great gift, but one that has also cost a great sacrifice: The childhood of his son Christopher Robin. The boy is the focus of a major motion picture twice this year. This summer, Disney will bring the grown-up Christopher Robin, played by Ewan McGregor, back to the lightheartedness of being a kid through his animal friends in what promises to be a joyful, heartwarming film.

At all, Goodbye Christopher Robin from Simon Curtis (The Woman in Gold) is a different story. While his film also has some very touching and beautiful moments, at its core it is a very sad story about the loss of a childhood and coming to terms with the trauma of war. Especially at the beginning, Curtis relies a little too heavily on washed out long shots of Domhnall Gleeson's face to symbolize his struggle against memories of the war. Not only is this somewhat overused, but it's also not very subtle.

Once the story has picked up a bit of pace - if that can be said for the overall rather sustained narrative tempo - it becomes easier to build an emotional connection with the characters. The most thankless role is played by Margot Robbie, who as a mother frustrated by country life, outright sells her son for success. All of this is admittedly a bit strikingly realized, but overall the emotional core of the story works very well. The film makes it clear that behind a story that has made so many people happy, there may well be one that has more or less destroyed an entire life. Curtis manages to do that without destroying the memory of Pooh the Bear and what it means. And for that there is - despite some weaknesses - a very clear: Worth seeing!