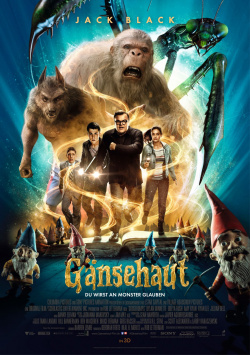 From the big city to the province - unlike for his mother, this is not a positive new beginning for teenager Zach Cooper (Dylan Minnette), but rather a disaster. But things don't look quite so bad anymore when he meets his beautiful neighbor Hannah (Odeya Rush). But standing between the two is Hannah's grumpy father (Jack Black), who makes it clear to the boy right at their first meeting that he doesn't want him dating his daughter. But of course, Zach doesn't abide by that. Believing Hannah to be in danger in her own home, he breaks in with his new buddy Champ (Ryan Lee) and discovers an incredible secret: Hannah's father is none other than R.L. Stine, author of the Goosebumps novels. There's a good reason why he keeps himself and his daughter so isolated from the outside world. Because the creatures he's made up for his books are alive and could pose a great danger to humans if he hadn't locked them safely away in his original manuscripts. Too bad Zach and Champ open one of these books, setting off a monstrous chain reaction that could take their entire town.

With over 400 million copies sold worldwide in 32 languages, the Goosebumps books are one of the most successful novel series ever. Only the adventures of Harry Potter have sold more. Author R.L. Stine struck a chord with his young readers when he published the first book in 1992, writing thrilling scary and monster stories from the teenage point of view. Some of the stories and creatures were adapted into a television series produced from 1995 to 1998. But R.L. Stine's works have yet to make it to theaters.

That's about to change with the 3D adventure Goosebumps, a humorous scary movie for teens 12 and up. Director Rob Letterman (Monsters vs. Aliens) takes very obvious cues from the genre classics of the 80s, especially in the first half. In terms of mood, his film is very clearly reminiscent of works such as The Goonies or Gremlins, the latter of which is quite clearly cited in the attack by a horde of nasty garden gnomes. The first sixty minutes are full of humour, charm and witty ideas, while the tension and creepiness levels are still kept at very tame levels. But when the monsters break out of all the books and descend upon the city, the action becomes much more action-packed.

As a lot of CGI effects are used here, unfortunately a little bit of the charm is also lost. Again and again the film threatens to lose itself in an effects overkill. But with a sure hand Letterman manages to turn the tide in time by the purposeful use of loosening up gags or short moments of calm. On a very positive note, the humor almost never veers into overly flat territory. The toilet humor that is so often used for a young target audience is almost not used here at all. Granted, not every gag works, but some of them are so delightfully offbeat that the few that don't work are quickly forgotten.

The teenage actors do a really good job, even if their characters aren't much more than walking clichés. Even the big surprise is convincingly delivered by Dylan Minnette (Prisoners) and Odeya Rush (Guardians of Memory). And Jack Black is convincing as R.L. Stine (who, incidentally, makes a small cameo appearance himself) with the right mix of somewhat understated comedy and seriousness. Even if Goosebumps isn't a masterpiece, the movie as a whole is perfect entertainment cinema with wit, suspense, neat effects and a decent amount of heart. And for that, there's a more than satisfied. Absolutely worth seeing!

Cinema trailer for the movie "Goosebumps (Großbritannien 2015)"
Loading the player ...