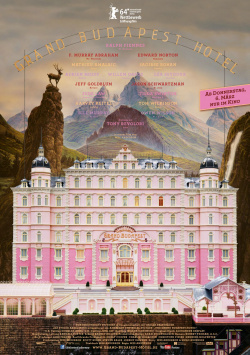 A young writer (Jude Law) is intrigued by the once-imposing hotel in the Eastern European alpine state of Zubrowka, where he hopes to break free of his writer's block. But he has no idea what a turbulent history lies within its venerable walls. When he meets the owner, Mr. Moustafa (F. Murray Abraham), and he reveals himself to be a big fan of the author, the writer hopes to learn more about the aging house's past. And indeed, Mr. Moustafa agrees to tell him the whole story: of his beginnings as a lowly lobby boy (Tony Revolori) who soon becomes the confidant of the maverick concierge Monsieur Gustave H (Ralph Fiennes). When a well-heeled elderly lady who has been a permanent guest at the hotel and in Monsieur Gustave's arms dies and leaves him a valuable painting, the concierge and his lobby boy embark on an adventure as turbulent as it is dangerous, with no happy ending due to the impending changes brought about by the impending war.

Director Wes Anderson has over the years acquired a style all his own, which gives his films a certain recognition value, but is still always good for surprises. If you've seen Rushmore, The Royal Tennenbaums or most recently Moonrise Kingdom, you'll immediately recognize that Grand Budapest Hotel is a Wes Anderson film just by the music or the acting of the actors. Yet his idiosyncratic style never seems redundant or worn out. Rather, his playful playfulness and the ingenuity of his visual compositions seem to increase from film to film. The means he uses are not really new. Anderson has already used painted backgrounds or stop motion effects in other works, most notably in The Deep Sea Divers. But how Anderson plays with such elements here, how he uses colors or equipment to create small works of art with unbelievable details out of single shots, is just ingenious.

As so often, the director lets his dialogues be recited almost emotionless by the illustrious cast, from which many scenes get their wit. However, this is also one of the reasons why Wes Anderson films have a character that is too special for many viewers. What his fans consider wonderfully weird and imaginative is absolutely inaccessible to others. And even if Grand Budapest Hotel does have a certain mainstream appeal, its own humour is likely to divide opinion once again. But if you appreciate Anderson's style, you'll be treated to a wonderful work, bursting with wit and originality. The script is full of great moments and perfectly composed word fights, which are transported to the screen in amused perfection by the prominent ensemble of actors. Particularly noteworthy is Ralph Fiennes, who performs the foibles of Monsieur Gustave H with a highbrow elegance that makes even small outbursts of the somewhat coarser kind sound like the finest highbrow.

But the real lead is played by Tony Revolori as a young lobby boy. The fact that he doesn't let himself be upstaged by seasoned pros like Fiennes, Bill Murray, Jeff Goldblum, Willem Dafoe, Adrien Brody, Harvey Keitel, Tilda Swinton, Edward Norton or Owen Wilson in his cinema debut is not only a testament to the Californian's talent, but also to Wes Anderson's perfectly coordinated choreography of actors. So it's no wonder that he managed to get so many prominent actors even for mini-appearances. For Anderson manages perfectly to fill even the smallest moments with such genius that truly every appearance, no matter how brief, is striking and memorable.

Grand Budapest Hotel is a great film on many levels. In addition to the visuals, which alone invite multiple viewings, it's the script and actors in particular that push the entertainment value so high that you feel like you can't get enough of this film. If you haven't been able to do much with Wes Anderson's movies so far, you definitely won't be able to understand these praises. But if you liked the director's earlier films, you will definitely love this comedy. And for this there is then also a more than deserved: Absolutely worth seeing!