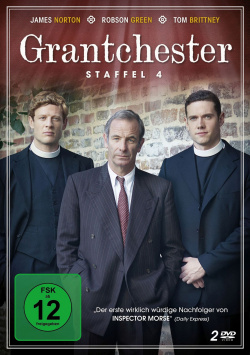 content: Grantchester in 1955 - time for big changes: The heart of the young vicar Sidney Chambers (James Norton) is broken and he falls into an ever deeper crisis of meaning. Even his friend, police commissioner Geordie Keating (Robson Green), can't really help him. Only when Sidney meets the American civil rights activist Violet (Simona Brown), he is torn out of his lethargy. Not only does he find a new vocation through her, but his heart seems to open for a woman again. However, this has drastic consequences for his life, as Sidney realizes that he can't stay in Grantchester any longer. His position in the church is taken over by the non-conformist Will Davenport (Tom Brittney), who at first is looked at with great skepticism by Geordie. But when the new vicar proves to be as helpful a sidekick in the fight against crime in Grantchester as Sidney was, the policeman also welcomes the new clergyman.

The crime series "Grantchester" has to take a difficult hurdle in its fourth year: The departure of a beloved main character. This is particularly difficult in this case, as the series lives to a large extent from the good chemistry between James Norton and Robson Green and the friendship between the vicar and the policeman is a central point in the story. With the departure of James Norton this changes abruptly, even though with Tom Brittney an interesting replacement was found. He fits in well with the ensemble - but whether his Will Davenport will become in the long run a similarly multi-layered and likeable character as Sidney Chambers was, that remains to be seen. The debut was successful, but is still obscured by the oversized shadow Sidney leaves behind.

Apart from that the series can score again in its fourth year with the ingredients that made the first seasons so successful. On the one hand there are the classic crime stories, which are told with typical British flair. That's not very original, but still never boring. These plot lines are completed by personal stories of the protagonists. Thus, this season Geordie has to get used to the fact that his wife also goes to work and brings money home, which is rather unusual for that time. However, she makes very unpleasant experiences when she doesn't respond to the advances of her boss - a topic that unfortunately is still very topical today.

Anyway, the series always manages to tell stories from the 1950s that are still relevant in our society and absolutely need to be discussed further - from sexual assaults to racism to homosexuality in church. Above all, however, the very high entertainment value of the series, which is perfectly established by the charming characters and the entertainingly written scripts - and this even without the charismatic James Norton, who will be sorely missed in this series.

Image + Sound: The audiovisual realisation of the series is on a similar level as in the previous seasons. The picture is also very clean in the new episodes, the overall sharpness is on a good level and real weaknesses can hardly be seen even in darker scenes. Moreover, the color scheme captures the atmosphere of the series very well. The sound is present in a rather reserved Dolby Digital 5.1 mix, which can score with some good surround moments in places, though. Good!

Extras: As a bonus, the second disc offers a look behind the scenes (approx. 12 min.), consisting of making-of recordings and interviews with makers and actors. Clearly, the focus here is on the farewell to James Norton. A bit short, but worth seeing!

Fazit: The fourth season of "Grantchester" doesn't have it easy, it has to cope with the farewell of a beloved main character. But the entertaining stories and a promising sequel make these new episodes absolutely worth seeing again. On the DVD the six episodes present themselves in good picture and sound quality and there is also some bonus material. All in all, this makes one thing very clear: Absolutely recommendable!