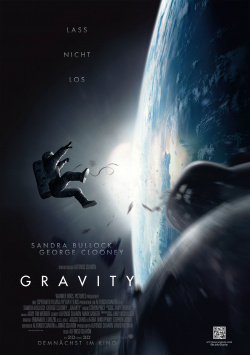 It was supposed to be just a routine checkup on the Hubble telescope that required Dr. Ryan Stone (Sandra Bullock) to leave the safety of the shuttle with veteran astronaut Matt Kowalski (George Clooney) during their first mission in space. But Stone's already nerve-wracking spacewalk turns into a dramatic fight for survival for the two when the shuttle is destroyed by flying space debris and the rest of the crew is killed. With no contact with Earth and little remaining oxygen, the medical technician must now fight her panic to make the most of the small chance she and Kowalski have left. But with every breath she takes, she comes closer and closer to death in the dark depths of space.

With Gravity, director Alfonso Cuar&oacute;n (Harry Potter and the Prisoner of Azkaban, Children of Men) finally returns with a new feature film after a seven-year hiatus - and what a one! Cuar&oacute;n not only impressively demonstrates that you can direct a claustrophobic chamber drama even in the vastness of space. In an absolutely nerve-wracking way, it also makes clear how exciting, thrilling, emotional and fascinating a film can be that is carried by only two actors and little dialogue. He achieves this in particular by getting the best possible performance out of his actors, but especially Sandra Bullock. Bullock's intense acting makes the viewer feel the fear, the almost overpowering panic, but also the powerful will to survive of her character at every moment - and this despite the fact that in most scenes she is in a spacesuit and her facial expressions are often only dimly discernible through the visor of her helmet.

What is particularly impressive is that the acting of the actors is strong enough to hold its own against the visual effects. And herein lies the reason why Gravity has become a great film. Cuar&oacute;ns production is like a carefully constructed clockwork, with all the individual parts working perfectly together to create a functioning whole. Music, visual effects, 3D visuals, actors, and the story itself, all of these first-rate individual parts only reveal their inherent quality when combined.

For the visuals, Cuar&oacute;n has relied on a mix of computer effects, cutting-edge camera techniques, real filmed scenes, and the latest techniques to suggest weightlessness. Through this visual hybrid, the film perfectly succeeds in drawing the viewer right into the action. At times this is mesmerizingly beautiful, at others it is literally breathtakingly thrilling. Gravity is one of the very few films that really works well in 3D. This is not due to classic effects, where things are thrown at the audience or fly into their faces. There are a few small moments of that, but primarily the 3D visuals are so successful here because they really make you experience the depth of space.

Besides the good actors and its impressive visual power, Gravity also has a very exciting story to offer, which is only superficially very simply constructed. But aside from the struggle for survival in space, the script, written by Alfonso Cuar&oacute;n and his son Jon&aacute;s, grapples with quite essential questions about life, death and coming to terms with loss. It does so in a way that is just obvious enough to keep the viewer emotionally involved in what's going on and not let go long after the credits roll. Gravity isn't just a thrilling motion picture, it's a genuinely involving experience that finally makes it clear once again that even the most perfect TV technology can't replace the true feeling of cinema. If you miss this film on the big screen and only watch it later on DVD, Blu-Ray or even - don't even think about it - on your smartphone, you're missing out on one of the best entertainment films and some of the most intense moments of suspense of the year. And for this, of course, there is only one possible conclusion: Absolutely worth seeing!!