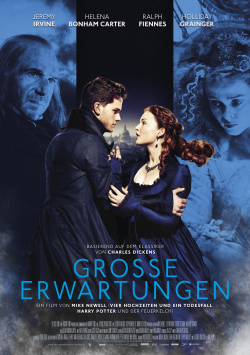 The works of Charles Dickens not only enjoy lasting popularity in book form. They also provide with nice regularity the material for sometimes more, sometimes less successful cinema entertainment. Whether the adventures of Oliver Twist, the countless variations of the Christmas story or the story of Nicolas Nickelby, filmmakers are always trying new adaptations of Dickens' work. The novel Great Expectations has also been adapted several times for cinema and television, for example in a modern version with Gwyneth Paltrow, Robert De Niro and Ethan Hawke from 1998. Now Mike Newell (Harry Potter and the Goblet of Fire) has also taken on the story and conjured up a dark, visually powerful drama with a little humor and romance. But the result leaves a somewhat ambivalent impression.

The story is told of Pip, an orphan boy hired by the eccentric Miss Havisham (Helena Bonham Carter), who hasn't left the house in years, to entertain her and her foster daughter Estella. The boy, who falls in love at first sight with the snooty Estella, henceforth dreams of one day becoming a true gentleman worthy of being with a woman of high standing. But how is Pip, who lives in the most humble of circumstances with his brother-in-law, the blacksmith Joe (Jason Flemyng), to manage to rise so high in society. He must resign himself to apprenticing with Joe and spending his life as a blacksmith. But ten years later, Pip (Jeremy Irvine) receives word that an unknown benefactor has left him a handsome fortune. In London, he is to be raised to be a true gentleman. Only he is never to pursue the identity of his benefactor. Pip is only too happy to accept this offer, having never forgotten Estelle (Holliday Grainger). But wealth, of course, does not come without a price. And Pip has no idea yet that it will be very high.

For the latest adaptation of the classic Great Expectations, producers enlisted acclaimed screenwriter and novelist David Nicholls (Two in a Day). It was his approach to the story, which unlike Dickens he doesn't just tell from Pip's perspective, that then got Mike Newell excited about the project. With the last true-to-life cinema adaptation having been made 60 years ago, the time also seemed more than ripe for a new version, despite a number of successful TV movies and miniseries. After all, the popularity of the novel is still unbroken today thanks to still topical themes and interesting characters such as Abel Magwitch - magnificently embodied in the film by Ralph Fiennes - or the emotionally cold Estella.

The screenplay manages very well to bring out the complexity of the characters and the various dramaturgical motifs well. The set designers have also done a great job. Especially the sometimes very dirty, gloomy London was brought to life impressively. Still, the film lacks that certain something that makes it stand out from the crowd of other adaptations of the novel. Those who already know the story will still be entertained at the beginning by the good actors like the once again wonderfully insane Helena Bonham Carter, the amusingly disgusting acting David Walliams (Little Britain) or the lovable Jason Flemyng, and by the engaging visual language. But in the long run, Newell just doesn't manage to build the kind of tension that Dickens so masterfully created in his novel. However, if you haven't read the book and haven't seen any of the other interpretations, this well-crafted adaptation will certainly captivate you.

Great Expectations is a good literary adaptation that can convince with good actors and an appealing set and only suffers from the fact that Newell's production, which is faithful to the work, doesn't succeed in offering connoisseurs of the story something really new and dramaturgically captivating. Therefore, the film can only be recommended to viewers who can't get enough of the story or who want to use this opportunity to finally get to know Charles Dickens' classic in its condensed form without having to fight their way through the rather hefty tome. For such viewers then also applies: thoroughly worth seeing!