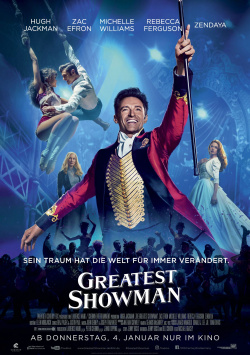 P.T. Barnum is considered by many to be the father of modern entertainment, a pioneer in making dreams come true. Legendary was his circus, which only had to close in 2017 after well over 120 years. P.T. Barnum was much more, however. He was a master of marketing, which doesn't exactly make him a non-controversial figure. That he exploited his artists and sometimes paraded them as curiosities can certainly be held against him. But there's no question that without the Greatest Showman, the entertainment industry would look different today. And that's why Michael Gracey's feature debut can be forgiven for taking a glorified and overly embellished look at the fabulous circus world of P.T. Barnum.

The cinematic musical, filled with catchy pop songs, shows Barnum (Hugh Jackman) a man driven by his visions who lifts himself and his wife Charity (Michelle Williams) out of abject poverty when he buys a cabinet of curiosities in New York and turns it into a circus. Together with his young protég&eacute; Phillip (Zac Efron), he puts on a show that fills the house day after day, but also draws protests on the streets. The full box office eventually isn't enough for Barnum, though. He also wants social recognition, which has so far eluded him. But when he discovers Swedish opera singer Jenny Lind (Rebecca Ferguson) and she becomes a superstar as the Swedish Nightingale, that might finally change - but at what cost?

Although some aspects in Greatest Showman are true to reality and there are real-life role models for many characters, the musical is by no means a biopic, but rather a colorful tale about following one's dreams. Moreover, the film is a plea for tolerance and self-confidence. This is not exactly conveyed in a particularly subtle way, of which the romance between the fictional characters Phillip and the colored artist Anne (Zendaya) is a very good example. Moreover, the message of the film probably doesn't match the business acumen of the real P.T. Barnum. But no matter: even if the whole thing is as meaty as cotton candy and has quite little to do with reality, the movie is absolutely worth watching.

And there are several reasons for that. The main reason is Hugh Jackman, whose charisma makes even the cheesiest moments of the film moving and charming. Considering that just a few months ago he was convincing in the dirtiest and most brutal version of his Wolverine character, you realize what a good and versatile actor the Australian is. Besides Jackman, though, it's the catchy and rousingly choreographed musical numbers that make Greatest Showman quite the cinematic treat. And the story, in this fictional version, is simply beautiful.

Therefore, brains off, hearts on! Then this journey to the beginnings of show business is a feast for the eyes and the ears. If you like movies like Moulin Rouge (without its eccentric streak) or Chicago, you'll love Greatest Showman. Absolutely worth seeing!