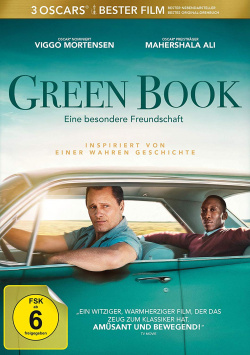 Film: Tony Lip (Viggo Mortensen) made a name for himself as a bouncer in New York in the early 1960s. But you don't get rich with this job, which is why Tony can only just keep his family afloat. A lucrative job offer comes just in time. Tony will accompany the celebrated pianist Dr. Don Shirley (Mahershala Ali) on his tour as driver and watchdog. There is only one problem: Shirley is black and the tour should lead through the southern states. Conflicts are virtually inevitable. Although the Italo-American himself has prejudices against Afro-Americans, he accepts the job. Two completely different worlds collide quickly and the journey threatens to become a catastrophe - until the two men slowly develop a certain respect for each other…

"Green Book" tells a wonderful true story. Nick Vallelonga, the son of the real Tony Lip, wrote the script that Peter Farrelly ("Crazy about Mary") did with a gratifying restraint. The movie is neither as a comedy nor as a drama too fat, but convinces with a pleasant balance. Of course, there are moments that make you angry and frustrate you a bit, as you realize that since the 1960s there hasn't been as much change as it should have been. On the other hand, there are also numerous scenes, some with very subtle humor and a large portion of charm for a real feeling of happiness.

Viggo Mortensen can leave a special impression here, whereby his wonderful Italian-American dialect is unfortunately completely lost in the German dubbing. However, this does not make his character any less charming in the German language version. He plays Tony Lip, who later also worked as an actor (among others in the celebrated series "Die Sopranos"), as a lovable rascal, who succeeds in changing his prejudices and thus wins a friend for life. Oscar-winner Mahershala Ali ("Moonlight") acts very cautiously and is therefore rather in the shadow of the wonderful Viggo Mortensen. But it is precisely this wonderfully distinguished restraint between the two actors and the characters they embody that creates an incredibly stirring dynamic that makes the film so wonderful in the end.

image + sound: With warm colours and a convincing overall sharpness the 60s feeling also comes across well in home cinema. The contrasts seem slightly overdrawn here and there, but this fits in well with the general mood conveyed by the images. The Dolby Digital 5.1 mix is genre-related rather reserved. The dialogues are powerful, but rather directionally mixed, which also applies to the great soundtrack. From time to time, however, ambient noises or smaller sound effects also ensure that the surround channels are used. Good!

Extras: The bonus material is unfortunately a bit disappointing. There are only three short promo featurettes with a total duration of just 13 minutes. Unfortunately, they superficially deal with the actors' performance, the true friendship between Tony Lip and Dr. Shirley as well as their implementation in the movie. Especially with regard to the true background a more detailed documentation would have been desirable.

Fazit: 3 Oscars and alone 1.48 million viewers in Germany speak a clear language: "Green Book" is simply a wonderful film which touches the hearts of the audience with its beautiful story. The DVD presents the award-winning drama in good picture and sound quality. The extras are okay, but way too short. This doesn't change the bottom line, because the film alone makes the purchase very clear: absolutely recommendable!