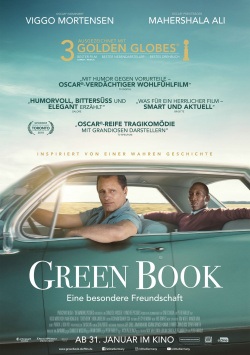 Tony Lip (Viggo Mortensen) has made a name for himself as a bouncer in early 1960s New York. But you don't get rich doing this job, which is why Tony can only just keep his family afloat. So a lucrative job offer comes along just in time. Tony is to accompany the celebrated pianist Dr. Don Shirley (Mahershala Ali) on his tour as a driver and chaperone. There is only one problem: Shirley is black and the tour is supposed to lead through the southern states. Conflicts are virtually pre-programmed. Although the Italian-American himself has prejudices against Afro-Americans, he accepts the job. Quickly, two completely different worlds collide and the trip threatens to become a disaster - until the two men slowly develop a certain respect for each other.

Green Book tells a wonderful true story. Nick Vallelonga, the son of the real Tony Lip, co-wrote the screenplay, which Peter Farrelly (Crazy for Mary) executed with pleasing restraint. The film doesn't lay it on too thick as either a comedy or a drama, but convinces with a pleasant balance. Of course, there are moments that infuriate and in the process frustrate a bit, as the viewer realizes that not as much has changed since the 1960s as it should. On the other hand, there are also numerous scenes that provide a real feeling of happiness with partly very cryptic humor and a large portion of charm.

Special impression can leave here Viggo Mortensen, although his wonderful Italian-American dialect is unfortunately completely lost in the German dubbing. However, that doesn't make his character any less charming in the German language version. He plays Tony Lip, who later also worked as an actor (including in the acclaimed series The Sopranos), as a lovable slyboots who manages to shed his prejudices and thus makes a friend for life. Oscar winner Mahershala Ali (Moonlight) acts very reservedly and is thus also rather in the shadow of the wonderful Viggo Mortensen. But it is this wonderfully distinguished restraint that creates an incredibly engaging dynamic between the two actors and the characters they embody, which in the end makes the film so wonderful.

Green Book is a plea to overcome prejudice and boundaries. Because in the end, something as unique, as wonderful as a genuine, deep friendship can be created that lasts a lifetime. Peter Farrelly has succeeded with this work of great feel-good cinema, which makes you happy all around and at the same time makes its audience think, without raising the moral finger too much or drifting into kitsch. For this, there is clearly a: Absolutely worth seeing!!!!